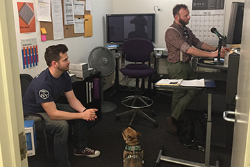 From January through the end of April, two students and one recent graduate from SUNY Cortland received hands-on, fast-paced studio experience as paid interns during the show’s second season.

The opportunity is the result of a partnership between SUNY Cortland and ABC/Disney coordinated by Sam Avery, a SUNY Cortland assistant professor of communication studies who hopes it is was the first of what will become an ongoing program for students interested in television and film production.

“This partnership is a phenomenal opportunity for our students,” said Avery, who is seeking to strike similar arrangements for students with other television studios. “It’s one thing to work on video projects in the classroom but real education comes from experiences. Internships, like the ABC/Disney “Quantico” one, bridge the gap between the classroom and the real world.”

The students agree the experience was invaluable.

“I was able to work on set and observe Jennifer Lynch direct episode 219,” said Huey, a senior communication studies major from Staten Island, N.Y. “Lynch has a great demeanor with the cast and has also directed episodes of ‘The Walking Dead,’ ‘American Horror Story,’ and ‘Teen Wolf’ among other shows.”

Both Huey and Croak agreed that a big perk was meeting the stars of this drama, which explores the lives of young government agents as they go through training to become special agents and beyond.

“One of the most interesting days had to be when I personally said ‘Hi’ to Priyanka Chopra, Blair Underwood, Jake McLaughlin, Johanna Braddy, and Russell Tovey all in one evening after they came in to record automated dialog replacement,” said Croak, a senior new communications media major from Brooklyn, N.Y.

Chopra, who plays the show’s main character, is an accomplished Indian actress, singer, film producer and winner of the 2000 Miss World contest. Underwood is an award-winning actor and familiar face to fans of television shows ranging from “LA Law,” “Sex and the City” and “New Adventures of the Old Christine,” to “Agents of Shield” and “The Good Wife.” McLaughlin is an Army-soldier-turned-actor best known for his work in the movie “In the Valley of Elah.” Braddy and Tovey have made extensive appearances on a variety of television shows.

But the students did a lot more than collect star sightings.

Huey has helped put together daily schedules of shooting and advance shooting from the production office or from the set itself.

“It’s basically a lot of organizing so the set can run smoothly,” Huey said.

Croak has spent some days on “Quantico” filing paperwork and others sitting in with editors and assistant editors.

“I pick their brains about their process and how they got their start: their career path that lead them to this point,” he said.

Croak also has helped organize lunch and dinner for the post-production team and coordinate with other areas of production, such as set design, the production office and the writers. Often, he delivered media storage devices and materials to associates such as Technicolor for color correction or Soundtrack for audio mastering.

“Some days I’m very busy, and other days I’m not too busy,” he said.

“I think the most helpful thing to my anticipated future career is that I know more of what to expect from not only post-production, but television in general,” Croak said. “There are so many things that go into making a TV show successful. Another helpful thing is that this job taught me discipline. The hours are still not ideal for me, but the fact that I proved to myself that I can do it and be disciplined made me realize that I do have television career potential should I want to continue in this industry.”

Both Huey and Croak honed their real-life skills by helping out with the Blackbird Film Festival at SUNY Cortland.

Croak assisted in Fall 2015 as an online submission judge of entries for the 2016 festival, during which dozens of new works by film makers from around the world are screened.

Huey was an event coordinator for 2016 Blackbird Film Festival.

“I was able to contact members of the film and television industry, facilitate events, book hotel rooms for attendees, gather donations from local businesses in exchange for advertisements, and coordinate the three day festival,” she said.

Huey added that her experience working for the school’s student-run television station, 20-CSTV, helped her learn how to write preliminary scripts, perform and edit footage.

“I would like to explore the worlds of writing for television as well as advertising,” Huey said.

Croak already finished at SUNY Cortland before the internship began. Currently he is enrolled in what he describes as “coding boot camp” to take him through the down time people in the television industry experience between seasons.

“We’ll see where that takes me,” he said of his interest in computer programming as a second career choice.

Croak and Huey are pleased to put real television set experience on their resumes.

And the ABC crew was glad to have them.

“They’re great kids, we’re really happy to have them,” said Cecilia Roque, Quantico’s unit production manager. “And they’re not just office PAs; we’re putting them to work, so it’s great experience for them.”

Avery said the internship partnership between SUNY Cortland and ABC/Disney began last November when the three Cortland students were chosen from among a larger pool. The trio was hired as paid production assistants for “Quantico.”

“Generally, the internship works better for students who have recently graduated or who can take the spring semester off,” Avery said. “After being selected, the Quantico producers find a department for them and they have the opportunity to work alongside professionals.”

“I think you need to acquire layers of knowledge,” Avery said. “First, you need to know the terminology. I think this internship gives them the second layer. It’s kind of like their hallway pass to go to the next level.”

“The knowledge of how a production office works and the opportunity to speak to the writers about how to structure scripts will help my future career,” she said.

Avery would like the Central New York area to become the place where future television and film is produced.

“With programs like this, we don’t feel so far away,” said Avery. “Give the students an opportunity to learn and they will return with the skills needed to make it happen.”