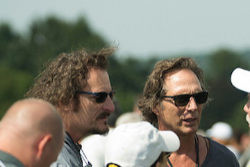 
Parts of the SUNY Cortland campus will become movie sets next week, as actor William Fichtner shoots scenes for “Cold Brook,” a drama he co-wrote and is directing.

The “Cold Brook” crew plans to shoot two scenes on campus; one on the College's athletic fields and another near its academic buildings.

“We are very excited to play a role in this project,” SUNY Cortland President Erik J. Bitterbaum said. “Bill Fichtner was raised in Upstate New York and has a great appreciation for this area. He had an opportunity to see our campus up close during the New York Jets Summer Training Camp several years ago, and we are thrilled to see him return.”

Fichtner is an accomplished actor who has starred in a long list of movies that includes “Blackhawk Down,” “Armageddon,” “The Dark Knight,” “The Perfect Storm,” “Contact” and “Crash.” His television credits include recurring roles on “Prison Break,” “Invasion,” “Entourage,” “Empire” and “Crossing Lines.” He currently plays a regular role in the comedy series “Mom.”

“Cold Brook” marks his debut as a director. In addition to Fichtner, the film stars Kim Coates, a regular on the television show “Sons of Anarchy,” and Harold Perrineau, who played in “Lost.” Coates, a close personal friend of Fichtner, attended Jets Camp with him at Bitterbaum’s invitation in 2014.

Fichtner, who grew up in the Buffalo-area community of Cheektowaga and graduated from SUNY Brockport, has already filmed the majority of his movie in and around Buffalo. .

Fichtner has described “Cold Brook” as “the story of two ordinary guys in a small town who embark on an extraordinary adventure. It’s a story about coming home; something everyone, everywhere has an innate desire to do.”