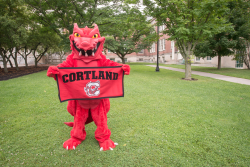 
Mascot Madness is back, and Blaze, Cortland’s one-of-a-kind Red Dragon, is primed to compete in the annual battle to prove which school has the most popular sports sidekick in the 64-campus SUNY system.

All SUNY Cortland students, alumni, faculty, staff, parents and friends can help Blaze reach his goal by casting votes on his behalf during the competition, which starts next week, March 14. The contest, patterned after the NCAA tournament, will narrow the field during five rounds of voting. A winner will be selected April 5.

Cortland Red Dragon supporters can – and should – cast their votes for Blaze online. Details on how to do that are still being finalized and will be publicized soon. In years past, Blaze fans were encouraged to vote once every 12 hours. They can also enlist help from friends, family and strangers on the street.

“This is a great opportunity for all people who have a connection with SUNY Cortland to show their school spirit in a lighthearted way,” President Erik J. Bitterbaum said. “Blaze has come close to winning in the past. Let’s make this the year he brings the honors back to Cortland.”

If Blaze makes it past the first round and continues through the end, this is the voting schedule:

Last year, SUNY Administration sent a series of questions to mascots at all SUNY campuses. Below is Blaze’s Q&A:

Q. Who are you and what do you do?

A. I am Blaze the Red Dragon, the fierce, fire-breathing mascot of SUNY Cortland’s powerhouse athletic teams. What do I do? Whatever I want. Did you miss the part about fire-breathing dragon?

Q. Where did you work before you were hired as a mascot?

A. I was chief of security enforcement for Daenerys Targaryen during her hostile takeover attempt of the Seven Kingdoms. I left because I wanted something that would challenge me intellectually.

Q. What is your most embarrassing mascot moment?

A. An allergy attack during our Cortaca Jug rivalry game. Big sneeze. Took out half the Ithaca College bench and scorched the scoreboard.

Q. Which mascot would be your SUNY sidekick?

Q. What is your favorite part of New York State?

A. Cortland and Central New York in general. It’s beautiful, there’s a ton of active things to do, and you can get anywhere in New York from here pretty easily. Plus, it’s a great place for barbecue!

Q. Have you ever studied abroad?

A. Does New Jersey count? But seriously, I studied history in Europe, art in Asia, biology in South America and education in Australia — all through SUNY Cortland’s amazing study abroad program, which was the first in the SUNY system.

Q. What TV show could you watch all day?

Q. What is your favorite fast food spot?

A. The mall. During the holiday shopping season. I just wish I could get everyone to take their coats off: zippers get stuck between my teeth.

Q. What song/music do you listen to in order to get hyped for an event?

Q. What is the best class you ever took?

A. SUNY Cortland has its own field station where you get real-world experience. I found a pen I lost back in the Mesozoic Era!