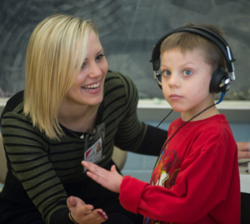 
Natalie Muka of Cortland appeared to be playing an unusual video game with an 8-year-old visitor to SUNY Cortland’s Center for Speech, Language and Hearing Disorders.

“EEEEhhhhhhhhhhhhhhhhhhhhhhhhhhh!” intoned Muka, an aspiring master’s degree candidate in communication disorders and sciences, using a clear demonstration voice. “Try that, and hold the sound as long as you can.”

A whimsical dragon hovered on a nearby video screen, puffing a series of balloons until they burst each time Muka made the sound and carried the note correctly.

Soon the boy was cheerfully coaxing the monster to zap away a succession of the digital inflatables by making similar sounds, unaware that a team of clinicians was measuring and recording his pitch and volume to be used as benchmarks during any future sessions with him.

Jill Toftegaard, Muka’s clinical supervisor, was carefully watching the performance of both the graduate student and the child from an observation booth equipped with video and audio recording machines behind a one-way viewing pane of glass.

Clinics such as this are a natural outgrowth of center, an facility that is located in the Professional Studies Building on campus and offers the only community speech clinic in Cortland County. As part of their studies, SUNY Cortland students provide speech-language and hearing evaluations as well as speech and language therapy to members of the community.

“We’re seeing approximately 20 to 30 clients here in the center each semester of all ages,” Toftegaard said.  Clients there are offered speech/language/hearing screenings, comprehensive speech and language evaluations and therapy for speech, language, voice, fluency and swallowing disorders under the guidance of qualified and licensed professionals.

That’s about twice as many cases as the students handled the year before, noted lecturer Mary Emm, who manages the center.

Both Emm and William Roche, who joined the College last year as an associate professor of communication disorders and sciences, think word of mouth is getting out about the center’s new diagnostic and treatment equipment. Referrals have begun happening as medical professionals and their clients can use these resources without having to travel to Syracuse or Binghamton.

The center greatly increased its service capacity last fall by adding clinical equipment to accommodate a dozen students pursuing SUNY Cortland’s new, accredited master of science in communication sciences and disorders degree. The first class considered community outreach to be a terrific hands-on learning opportunity, as well as a way to fulfill their requirement for at least 50 hours of clinical work during their first year.

“Other places may not have the clinical instrument found at SUNY Cortland and this will provide a collaborative opportunity for our students to share their experiences,” Roche said. “They will understand that they have multiple choices about which piece of equipment they can use. There is not just one wrench in their tool chest.”

Roche oversaw the acquisition, installation, use and maintenance of new diagnostic and treatment equipment the students are using. The College purchased many devices for $70,000, including voice and speech output devices, machines to measure myotropic lateral type diseases such as Lou Gehrig’s disease, computerized systems that augment ineffective or impossible communication, which some clients will need to be shown how to use in daily living.

The crown jewel of the center is the new swallow lab, the gift of the College by alumna Patricia A. Boscamp-Cluss ’79, responding to a need communicated by Department Chair Regina Grantham. The equipment involves a procedure to send a tiny camera to record and measure a client’s swallowing, speaking and breathing capabilities.

Most devices are portable and the graduate students are encouraged to bring and show them to their mentors during their second year, when all are required to complete the balance of 400 clinical hours offsite in both an assigned school setting and clinical setting, Roche said.

Michael Pitcher, a lecturer and the College’s coordinator of audiological services, leads another outreach effort that’s helped the center grow.

“The average age of identified hearing loss in children is prior to six months of age,” Pitcher explained. “But there are children who have hearing loss that develops later or may go unnoticed, until they show difficulties or behavior issues in school. Those are the kids we want to identify.”

These highly successful community clinics, which relieve school nurses of an enormous, mandatory task, will continue during the 2014-15 academic year.

The center also screens children in the local Head Start program, to spot speaking difficulties in the 3 and 4-year-olds before they enter kindergarten, Emm noted.

For the sake of SUNY Cortland students’ career preparation, center faculty and staff look forward to working with clients of all ages. That would include all preschoolers as well as adult and geriatric patients who have lost speech and hearing due to illness. It would also include a variety of client groups, such as people for whom English is not the first language and individuals suffering from disorders ranging from autism to a speaking difficulty termed “aphasia” that is related to a stroke or other neurological illness.

“We are helping someone to communicate, and communication is so essential to life,” said graduate student Kelli Carsten of Syracuse, N.Y. “This field brings us so many areas of interest to work with: biological, medical and helping people communicate. If someone has a physical loss, they still can communicate, but if someone can’t communicate, for whatever reason, it … affects your quality of life so much.”