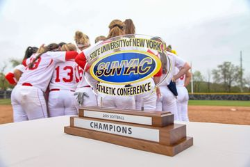 
Erin Locascio ’16, M ’18 has traveled to some incredible places chasing her passion for photography.

She’s shot Division I women’s basketball and men’s ice hockey national championship games on consecutive weekends as an intern for the University of Notre Dame.

And she started her own business, EDL Photography, which brought her back to campus for the SUNYAC softball championships on May 5.

Most importantly, Locascio has made friends for life. Those relationships are what fuel her work and make her stand out in the crowded field of sports photography. Sure, Locascio wants to capture the goals, home runs and touchdowns, but she also wants to tell the stories of the people who wear the uniforms.

“It’s the camera, but they also notice me as a person,” she said. “I love meeting the professional athletes and I love college athletics. I got to go to Yankee Stadium and shoot Notre Dame. Those moments are amazing and I’ll always love those moments. But more than that, I love the connections I make with the kids and I love when they care about what I’m doing.”

Locascio was an athlete growing up in White Plains, N.Y., playing mostly volleyball and lacrosse. During her senior year, she stopped playing to become a team manager for a number of sports. She’d help out and practice, keep score during games and snap some photos when she could.

She did much the same during her four undergraduate years as a physical education major at SUNY Cortland, serving as team manager and unofficial team photographer. As much as Locascio enjoyed teaching and coaching, she wondered if there might be a career in photography for her. So she decided to get a master’s degree in sport management at Cortland, a decision that opened doors.

Part of Locascio’s master’s requirements was an internship. She learned of an opportunity to take photos for the University of Notre Dame’s athletic teams and she jumped at the chance.

Locascio shot sports ranging from fencing to football and everything in between. She gained valuable experience not only on the sidelines at games but also in Notre Dame’s Athletic Communications Office, taking headshots of athletes for media guides and assisting staff members in graphic design.

When that internship ended in May 2018, Locascio returned home to White Plains and started EDL Photography, planning to start by expanding on the work she had done previously of shooting photos for the local Hit-N-Run summer camp and its travel baseball and softball teams. Another part of her master’s degree requirements was to create a business plan for a fictional company, which she did for her idea of the sports photography business that became EDL for Associate Professor Tara Mahoney.

As she was getting EDL Photography off the ground, a Notre Dame connection informed Locascio of an opportunity at Columbia University in New York:  a semester-long photography internship with the football team. She took pictures at practices, workouts and games. It didn’t take long for the players to take to Locascio, pointing at her during breaks in the action and mugging for the camera.

At the end of the season, the Columbia players presented Locascio with flowers and a signed football helmet. It was a gesture that left her in tears. What the players didn’t know was that Locascio had broken up with her girlfriend weeks before the season started.

All of those little gestures — such as the time during the team’s walkthrough at MetLife Stadium in November, Locascio thought she was taking a photo of a player taking a selfie, but he was actually taking a photo of her — added up and helped her during a tough time.

“Those football players healed my broken heart,” she said. “It was great to be around a group of kids like that every single day.”

This spring, Locascio has focused her efforts on documenting five high school baseball and softball teams in Westchester County. She creates custom galleries of players whose parents have paid for a season-long package of photos and she also creates posters that combine her photography and graphic design skills.

No one really does high schools the way I’m doing it,” Locascio said. “You have parents going around and you have companies taking headshots and you have the media, but I feel like I’m doing something from scratch. I don’t think there’s anyone doing what I’m doing as a business and giving parents as many photos as I’m giving them.”

She already considering hiring additional help, potentially an intern who has as much passion for sports and photography as she does.

“In the next five years I want EDL Photography to continue to blow up the way I know it can,” she said. “I know the parents love what I’m doing.”

Locascio recently returned to campus to shoot the SUNYAC softball tournament, which held special meaning as she had served as Cortland’s team manager. She wanted to capture what could have been head coach Julie Lenhart’s final games as she is set to retire after 25 seasons of leading the Red Dragons.

Locascio stuck around long after the final pitch, using her camera to freeze memories for the players who had fought so hard to be able to hold aloft that SUNYAC champions trophy.

“I’m there to capture everything,” she said. “I want to get every moment of the game. I want to get from first pitch to the pitcher and catcher hugging after the game, which I just got the other day. I want to capture it all. The action is going to be there every day but those hugs and those celebrations, you don’t know when they’re going to happen, but I can anticipate those more than others can.”