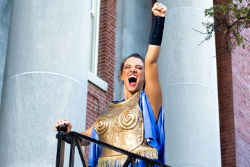 
SUNY Cortland’s first theatre production of the 2019-20 season is “Lysistrata,” a Greek comedy by Aristophanes that was originally staged in 411 B.C.

Audiences, however, should expect something much different than a traditional Greek play.

“It’s probably the most inappropriate thing that’s been on the Cortland stage,” said senior Cait Zuckerman of New York, N.Y., who plays Lysistrata in the production that opens Thursday, Oct. 3 in the Dowd Fine Arts Center Theatre. “The translation is easy to follow and it’s a super good time.”

Director Deena Conley, associate professor in the Performing Arts Department, chose a 2009 translation by J.A. Ball and Michael Chemers that uses colloquial language and contemporary references. It brings to life the timeless story of “Lysistrata,” in which the title character gets women to band together in denying sex to their husbands in hopes of ending the Peloponnesian War.

“It’s about people at war and the power of women both then and now,” Conley said. “Society is coming to the realization of the power that both genders possess and should be conscious of. It’s done in such a fun way that it’s not offensive.”

SUNY Cortland’s musical theatre majors spend time in class reading and performing sections from works including classic Greek plays and Shakespeare. “Lysistrata” offers students an opportunity to take some of those lessons to the stage.

JoDee Hall, a second-year student from New York, N.Y. leads the chorus of women characters in the play. Sean Amato, a junior from Stony Brook, N.Y., leads the male chorus. Their role is to connect with the audience, which they do to hilarious effect in this particular play.

“The chorus is really the backbone,” Hall said. “We’re helping the audience understand the story fully and what we’re all feeling as the men and the females in the show.”

“It’s very much like two siblings fighting,” Amato said. “It’s fun because a lot of the show feels like me and JoDee going back and forth and messing with each other with banter and really poking fun.”

This updated version of “Lysistrata” is still set in 411 B.C. Greece but its main themes — sex, power, war and gender relations — are sure to resonate with today’s audiences.

“It’s really cool because we’re still in the peak of the #MeToo movement going on right now and this is the farce Greek version of that,” Zuckerman said. “Yes, it’s an old story but it’s what we’re still doing now. It’s war. People are at war for no reason.”

Despite the gravity of these topics, SUNY Cortland’s production of “Lysistrata” promises to handle them with plenty of raunchy humor and innuendo.

“it’s funny to think that this was originally written in 411 B.C. and you think of people in togas being proper,” Amato said. “But they were being silly and making these jokes.”

Because of the thematic nature of the play, “Lysistrata” is recommended for adult audiences only.

Performances in the Dowd Fine Arts Center Theatre on Oct. 3, 4 and 5 begin at 7:30 p.m. and there will be a 2 p.m. matinee on Sunday, Oct. 6. Tickets are $19 for adults, $16 for faculty, staff and senior citizens and $9 for SUNY Cortland students and are available at Cortland.edu/boxoffice.