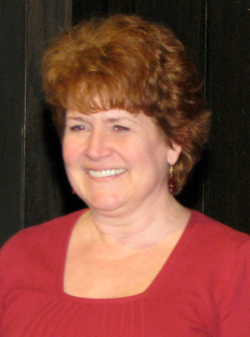 
Marie Blanden is the warm and reassuring voice on the phone for many an anxious parent, but she’s much more than that to four colleagues who nominated her for the prestigious 2013 President’s Award for Excellence in Classified Service.

Sponsored by the College’s Human Resources Office, the ceremony was held in the Corey Union Function Room.

“Marie has never wavered in her belief in the student affairs mission and the idea that we are here for our students,” Bitterbaum said. “Her passion and support for our students is a model for the rest of us.”

The award was created in 2002 to annually recognize one individual “for extraordinary achievement and to encourage the continuation of excellence.” Nominees must be current SUNY Cortland full-time classified service employees with at least three years of continuous service. Supervisors, co-workers or other College community members nominate the workers considered for this honor.

Blanden joined SUNY Cortland in 1983 as a stenographer in the Financial Aid Office. Two years later, she moved over to the Student Affairs Office and was promoted to senior stenographer. In 1989, she was reclassified to secretary I and in 1991 was promoted to her current position.

The 31-year College employee has been a driving force in many programs that enriched the college life experience of countless students. Just a few of the activities are Family Weekend, the Tobacco Advisory Committee, the “Paws for Stress Relief” program and the Communities That Care College Connections group.

“Marie is always willing to attend Family Weekend programs and speak to parents not only as a SUNY Cortland staff member but also as the parent of a college student,” said Christopher Kuretich, the assistant vice president for student affairs.

“Marie is a member of the Tobacco Advisory Committee who graciously shares her experience as an individual who was successful at quitting smoking,” noted Louise Mahar, assistant director for fitness within the Division of Student Affairs. “She worked very hard designing a PowerPoint presentation for the smoking cessation program … and helped organize and administer the FreshStart tobacco cessation classes on campus. She regularly takes time out of her busy schedule to meet with individuals committed to quit using tobacco.”

Blanden works with Devin Coppola, the College physician, and Louis Gatto, professor of biological sciences, to offer those support groups.

An invaluable member of the campus Paws for Stress Relief committee, she helped develop many of the projects, crafts and activities around this pet therapy opportunity for students during exam week, according to Catherine Smith, the College’s health educator. In fact, Blanden has presented about this very popular program twice, during the New York State College Health Association Annual Meeting and at SUNY Cortland’s 63rd annual Recreation Conference.

She is given much credit for keeping the division office functioning smoothly, even in the midst of many recent retirements and the introduction of new colleagues.

“Marie is a source of historical knowledge about policies and the College in general to all the campus,” said C. Gregory Sharer, vice president for student affairs. “She has been a wonderful resource for me, and many others, as she is able to provide context to the creation and evolution of many of our policies and practices.”

“I have never felt more welcomed into an environment than I did when I started in Student Affairs here,” Kuretich commented. “She transformed from being the secretary for an office of one VP to working seamlessly with both Greg and I. She has continued the excellence that has been the norm here for many years.”

“She is an outstanding problem solver,” Sharer said. “If she doesn’t have the answer, she persists until she does.”

“She spearheaded several ad-hoc committees to stay ahead of the changing technology curve, as was the case in her coordination of the Campus Life tab/office channels on myRedDragon,” he said.

“Marie is a ‘multi-tasker extraordinaire,’” Smith observed. “She is able to work with many offices, departments, divisions and organizations. She works with faculty, staff, students, parents and community members. She is a model of organization.”

Blanden lives in Truxton, N.Y., with her husband, Walter (“Wally”). She has two sons, Adam, who is married and earning a medical degree at SUNY Upstate Medical University, and Zachary, who plays baseball for Binghamton University where he is enrolled a student.