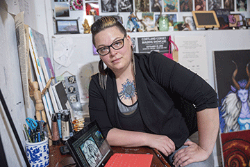 
With one foot in the past and the other in the future, the City of Cortland embodies the Victorian era-meets-science fiction concept of steampunk.

Crystal Lyon ’09 of Cortland, a working artist and consummate do-it-yourselfer, is one of the visionaries behind the Gears to Corsets: Cortland County Steampunk festival, set for Sept. 27 to 29 in five different locations in Cortland and Homer, N.Y.

“It’s a really cool thing, a fantasy,” she said of steampunk, a genre of science fiction that has spawned an entire sub-culture of art, fashion and lifestyle. “I chose Victorian steampunk because it’s old but it’s also new. And everyone gravitated toward it. “

“The essence of steampunk is homage to vintage fashion with a modern, sassy twist,” Lyon said.

“It’s the best collaboration, because it’s all about creating more exhibition space and getting tourists interested in coming to town, experiencing new things, rejuvenation,” Lyon said.

Festival participants will be invited to role play steampunk characters of their own invention in genre clothing and accessories during events inside the Cortland Corset Building, at the 1890s House, the Cortland County Historical Society, the Center for the Arts in Homer and the CNY Living History Museum.

CRT Downtown will be hosting a steampunk fashion show during the Gears to Corsets Cortland County Steampunk Festival.

“I’m determined to bridge the gap and crosspollinate, especially when it comes to art creative opportunities,” said Lyon, who in 2017 started her own multi-media art studio, Living Illusion Studio, upstairs in the Cortland Corset Company building at 75 East Court Street.

The massive brick factory, built in 1872 — smack in the steampunk time setting — is now an eclectic retail, art and wellness center, with many small businesses and organizations operating in areas originally built for making wagons or women’s undergarments.

Ten years after graduating from SUNY Cortland with a B.F.A. in new media design, Lyon has mastered the skill of using public art as a means to foster ties in the community, creating wall murals, light-projected artwork and outdoor installations.

To underscore Cortland’s steampunk cred, Lyon used social media to summon helpers from her growing association with local artists to help her paint a 42-foot tall steampunk mural on the west side of the Cortland Corset Building, facing Pendleton Street. Lyon’s mural features an adventurous-looking woman in a long, Victorian style long gown wearing aviator’s goggles and sporting a baby dragon on her shoulder.

High school students, Tompkins County Community College students and many community members — some of them artists and some not — pitched in.

The mural’s steampunk heroine also is emblazoned on a T-shirt that Lyon plans to sell at the festival. She handles all the event’s graphic design work and serves on the festival planning committee.

Lyon hopes the festival venture will encourage a renaissance of sorts between those who appreciate the arts in the local community and artists at her two earliest alma maters, TC3 and SUNY Cortland.

Her idea is to encourage cosplayers — role players who create and wear character costumes for fun — from far and wide to show up.

“There’s nobody else really planning something like this, and we have a whole list of steampunk festivals, “ Lyon said. “What we want to happen could be the biggest one in this region, in the northeast. “

She obtained a $2,500 award through the CNY Arts Decentralized Grant for Individual Artists in 2018 and 2019 as well as private donations to support the mural project and create steampunk-themed projection artwork for the festival.

Lyon returned to her hometown from San Francisco in 2014 bearing an M.F.A. in motion picture television with a concentration in production design from the Academy of Art University. She wanted to be closer to her family, but did not know quite what to do with herself until she discovered opportunities to create a rejuvenated local art scene by collaborating with Christine Shanks, the graphic design chair and associate professor at TC3.

“She was new to the area as well and we became friends,” Lyon said. “She pulled me into the downtown revitalization grant.”

Shanks and Lyon collaborated to advocate for a future Crown City Artists Project planned in connection with a $10 million grant the city received in 2018 from New York state’s Downtown Revitalization Initiative. Now in a working group phase, when the endeavor gets underway Lyon envisions her role will be encouraging artist participation in public art projects.

Lyon currently tutors digital and art students at TC3. She will be teaching an introductory course in new media this fall at SUNY Cortland, when Martine Barnaby, her former mentor and an associate professor of art and art history, will be on sabbatical.

After she joined the Cortland Repertory Theater as house manager and production assistant in 2016, Lyon arranged a pop-up exhibition for local artists in the black box-style theater space at CRT Downtown in Cortland. The exhibit ran for two weeks this year, starting the last week of February.

“Anywhere else, in any other city, especially for artists, locations like the Cortland Corset Building are prime real estate,” Lyon marveled while standing in her studio with its quaint old factory atmosphere. “You want to be in space like this where other people are doing collaborative things.”

“We hang out here to make art,” Lyon said. “Sometimes I hold a sketch night where people can come in and hang out and talk about what they are working on, talk out their creative problems.”