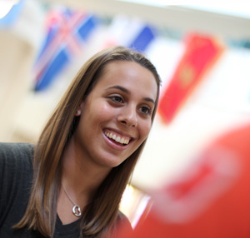 
SUNY Cortland recently awarded approximately $65,550 in scholarships and exchange awards to help 44 of its students expand their educational horizons through study in Morocco, Germany, Belize or other countries.

The College will provide $21,300 in scholarships so 36 students can study abroad during the 2013 winter session or spring semester and $7,250 to underwrite the scholarship of international students at SUNY Cortland during the spring semester. Additionally, the College, through its many exchange agreements with international universities, presented eight SUNY Cortland students with almost $37,000 in tuition waivers and grants to help pay for their international study during Spring 2013.

Six different SUNY Cortland scholarships, ranging in size from $250 to $2,500, were awarded. They are managed, along with the exchange awards, through the College’s International Programs Office.

“These scholarships and awards reflect the robust commitment of the College and its alumni to making international study and internships affordable for our students,” said Mary Schlarb, director of international programs. “The number of Cortland students studying, interning and student teaching abroad has been rising steadily, which we can attribute, in part, to greater student access to funding and the active promotion of international programs by faculty, staff and returned participants.”

In addition, most undergraduate and graduate students from other countries now receive an International Award of $2,125 per semester through a SUNY Cortland program that parallels the Future New Yorkers award for out-of-state students, Schlarb said. International students, like those living outside of New York State, pay a higher tuition than in-state students.

This year, two new scholarships, the Study Abroad Scholarship and the Five Continent Scholarship, advance the College’s goal of diversifying the type of SUNY Cortland students who go abroad and its desire to increase the variety of students’ global destinations, she said.

“The Study Abroad Scholarship provides access to students from groups underrepresented in study abroad,” she said. “The Five Continent Scholarship is awarded to one student per year to study in a non-traditional study abroad destination where English is not a commonly spoken language.”

Recipients for the scholarships and exchange awards were selected based on criteria that included high academic achievement, financial need, involvement in extracurricular activities, a personal essay and letters of recommendation. A description of the scholarships and the award recipients appears below:

Overseas Academic Program (OAP) scholarships are awarded to students accepted in a study abroad program. The scholarship is $300 for winter recipients and $250 or $500 for spring recipients.

The OAP Award recipients for Winter 2013 are:

The OAP Award recipients for Spring 2013 are:

• Marwan Circelli, a sophomore Spanish major from Auburn, N.Y., for studies at University of Salamanca, Spain;

• Mary Grant, a senior childhood education major from Hobart, N.Y., to experience a semester of student teaching in Australia;

• Melissa May, a junior adolescence education: mathematics major from East Meadow, N.Y., for scholarship at University of Salamanca, Spain;

• Michael Pallassino, a junior adolescence education: social academic work major from Cortland, N.Y., for studies in Montpellier, France through the University at Albany;

• Aimee Ris, a senior childhood and early childhood education major from Farmingville, N.Y., to experience a semester of student teaching in Australia;

• Tricia Silliman, a senior childhood education major from East Aurora, N.Y., to experience a semester of student teaching in Australia;

• Alanna Stark, a junior inclusive special education major from Great Neck, N.Y., for academic work at University of York in the United Kingdom, through SUNY Brockport;

• Melissa Tierney, a sophomore from Irvington, N.Y., for studies at University of Salamanca, Spain;

• Ashley Vogler, a sophomore psychology major from Jamesville, N.Y., for studies at University of Glasgow in the United Kingdom, through SUNY Albany;

Created in September by the James M. Clark Center for International Education, the scholarship was developed by Sharon Steadman, the center interim director, with funds from the Rozanne M. Brooks Foundation, established with a gift from Brooks, the late sociology/anthropology professor. The award supports a student who has demonstrated superior academic aptitude for study in a non-English-speaking country, with the exception of African countries in which English is listed as a national language. Preference will be given to students planning to study in Africa, Asia, the Middle East, Latin America or Central/Eastern Europe/Eurasia.

SUNY Cortland graduate Kevin A. Rowell ’83 created the award in 1998 to support the overseas studies of a student who has participated in club sports, student government and volunteer work. The recipient of this $1,500 award for Spring 2013 is:

Created in 1991, the Uschald Study Abroad Scholarship is named for Willi A. Uschald, professor emeritus of foreign languages and director emeritus of international programs at SUNY Cortland. Uschald Scholarships are open to students accepted to a study abroad program who are U.S. citizens.

A scholarship created in 2010 by Ronald and Marguerite Huether and family honors the memory of their son, Gregory R. Huether ’10, and the wonderful international education experience he had at SUNY Cortland. The Gregory R. Huether ’10 European Sport Study Seminar Memorial Scholarship offers the College’s sport management majors a study abroad opportunity. Scholarships of $2,500 for Spring 2013 were awarded to:

The Yuki and Wah Chip Chin Memorial Scholarship supports exchange students at SUNY Cortland from Capital Normal University in Beijing, other Mainland China universities and other Asian countries. It also supports SUNY Cortland students wishing to study in Asia. The scholarship was created by Chinese native Wah Chip Chin and his Japanese-born wife, Yuki. During their lives, the local Cortland couple opened their hearts and home to visiting Chinese students. Wah Chip survived his wife, expanding the scholarship in his estate in 2003. The Spring 2013 recipient of the $3,000 scholarship is:

• International graduate student Yang Yang of China, who continues for a second semester as a graduate exchange student from the College’s partner institution, Capital Normal University, in Beijing.

• Adiam Zerisenai (originally from Eritrea); and,

The College presented eight SUNY Cortland students with exchange awards resulting from agreements it has with some of the College’s 25 international partner universities, saving the selected students a total of almost $37,000. The partner universities involved on both sides have agreed to waive tuition for students involved in the exchange so that, for example, an award recipient pays only the SUNY tuition for the duration of the study abroad opportunity.

Recipients of exchange awards for Spring 2013 are:

• Jenifer Aberle, a junior physical education major from Middle Island, N.Y., for scholarship at The University of Ballarat, Australia;

• Lesley Harlem, a junior business economics major from Oneonta, N.Y., for studies at Griffith University or University of Ballarat, Australia;

• Lydia Rosario, a junior psychology major from Bronx, N.Y., for scholarship at University of Salamanca, Spain; and,

For more information on the scholarships, contact the International Programs Office at (607) 753-5989.