Speaker Embraces His Own Individuality 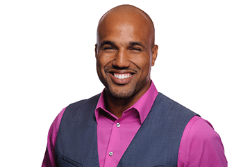 Essence Magazine said of the best-selling author, “He should be the poster boy for rags-to-riches stories ... he is America’s Top Young Speaker.”

Moodie, a featured speaker at the White House who was acknowledged by former President Barack Obama, will speak on Tuesday, April 23, at SUNY Cortland.

He will discuss “How to Create an Identity for Success” at 7:30 p.m. in Sperry Center, Room 105. The event is free and open to the public.

The presentation is geared to all who want to become more confident with themselves and learn how to be at peace with who they are on the inside, regardless of what stresses happen to occur on the outside. The talk will explore what the journey to self-acceptance is about and how one undertakes learning who one really is.

“The hardest yet easiest journey we all have to take is accepting ourselves for who we are,” Moodie said. “Creating pride in our identity regardless of who we are is the key to having an identity for success.”

A Jew of color, Moodie grew up on welfare in the projects of Brooklyn, N.Y., where he witnessed those around him being murdered and imprisoned.

Today he has delivered professional speeches to more than 400,000 people in 48 states and five countries. Moodie is married to a half-Korean woman. For fun, he likes to dance. Moodie has performed at Madison Square Garden and has two viral videos that have millions of views. One of them was even featured on “The Ellen DeGeneres Show.”

Moodie decided early in life that college was his way out. By the time he finish high school, he had exceled his way to being named the most outstanding graduating senior.

Moodie joined a Latino Fraternity in college. After graduation from Binghamton University and while still in his 20s, he built a million-dollar event production and education company.

By using his story of growing up Jewish but not looking Jewish by many social standards, Moodie had to not only face the challenges of accepting himself within the Jewish community while also creating a sense of pride to be Jewish in any community.

“In my presentation, students will walk away discovering what are the key questions and actions to take to start discovering who they really are right now,” Moodie said.

“They will also understand what keeps them from accepting themselves and the reality of the social pressures that are real and are the barrier to an identity of confidence which leads to success.”

Moodie’s lecture is sponsored by Hillel, Jewish Studies, the President’s Fund, the Campus Artist and Lecture Series, the Center for Gender and Intercultural Studies, Africana Studies Department and Multicultural Life and Diversity Office.

For more information, contact Nance Wilson, professor and chair of the Literacy Department and coordinator of Jewish Studies, at 607-753-4375.