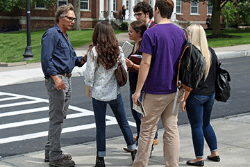 
Television and movie actor William Fichtner will return to SUNY Cortland Wednesday, Oct. 2, to offer a free, public screening of “Cold Brook,” a movie that was partially filmed on Cortland’s campus.

Fichtner, who directed, co-wrote and starred in the film, shot most of the movie in western New York, but did several scenes in Cortland, using college students as extras in the summer of 2017. It was the first film directed by Fichtner, an accomplished actor with a regular role on the acclaimed CBS television comedy “Mom” and an impressive list of movie credits that include “Blackhawk Down,” “The Dark Knight,” “Armageddon,” “The Perfect Storm” and many others.

The movie is set for theatrical release on Nov. 8. But Fichtner is giving the Central New York community an early look with a special showing in Old Main Brown Auditorium, less than 200 yards from where he filmed an important scene in the movie.

“I always knew in the end that there were a couple of shots I really needed that I could only get in Cortland,” said Fichtner, recalling how he had to persuade his producers that he had to add another location into the film’s budget.

“Erik (Bitterbaum, president of SUNY Cortland) was so supportive,” Fichtner said. “When we were done, he said it would be great someday if we could do a screening on campus, and I never forgot that. I wanted to honor that.”

The screening begins at 7 p.m. After the movie, Fichtner will answer questions from the audience and attend a reception in Old Main’s Dorothea Kreig Allen Fowler ’52, M ’74 Grand Entrance Hall. All three events are free and open to the public.

“Cold Brook,” which Fichtner co-wrote with actor Cain DeVore specifically for Fichtner and “Sons of Anarchy” actor Kim Coates to star in, is the story of two small-town guys who embark on an incredible adventure.

“Truth be told, the story of my journey with ‘Cold Brook’ is not so different than the story of its two protagonists: Ted and Hilde,” Fichtner said. “It’s about friends trusting each other and trusting in a story they believe in; about pursuing something all the way to the end and growing into the best possible version of yourself.

“So too has been my process writing ‘Cold Brook’ with one great friend, so that in time I could have the opportunity to direct my first feature and act in it alongside another great friend. Sometimes it’s all that simple. Surrounding yourself with the people you love to do the thing you love most.”

Fichtner began visiting Cortland while he was a student at SUNY Brockport because it was the hometown of his college girlfriend. The relationship didn’t last, but his friendship with her family remained strong over the decades, with Fichtner, a Western New York native, frequently traveling to the Cortland area to stay with them at their summer camp.

This camp, located off Cold Brook Road in Cortland County, plays a big part in the movie, Fichtner said. On the SUNY Cortland campus, Fichtner’s crew filmed scenes on Graham Avenue, between Brockway Hall and the Miller Building, as well as on Holloway Field. Several SUNY Cortland students helped out with the production as interns or extras.

The Cortland screening is one of three SUNY campus previews Fichtner is hosting in New York state, while “Mom,” which is starting its seventh season, is on a brief filming hiatus. On Oct. 1, the movie will be shown at The College at Brockport, and on Oct. 3 it will be viewed at Farmingdale State College.

“I graduated from Brockport and I spent two years at Farmingdale,” Fichtner said. “Before ‘Cold Brook’s’ actual release I wanted to do something special at Cortland and at my two alma maters as well.”