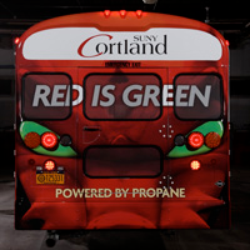 The graphics, which imaginatively combine images of Blaze, the College’s red dragon mascot, with messages on sustainability, are featured on four new buses acquired by SUNY Cortland this fall to run regular transportation routes through campus.

“According to the Chinese zodiac, 2012 is the year of the dragon, and that’s especially true at SUNY Cortland, where our own Red Dragon will greet students at campus bus stops every day,” College President Erik Bitterbaum said. “There’s nothing quite like this on any other campus in the SUNY system.”

Two of the new, propane-fueled buses are covered with shrink-wrapped images that transform the front of the bus into the head of a determined-looking red dragon with striking green eyes. The message on the side of the bus reads: “Get Green Vision.”

Another wrap shows a pair of giant red dragon feet crunching down on the roof of the bus and creates the illusion of broken windows and mangled metal. The slogan on the side reads: “Jump on board!” The wording refers to both riding the bus and joining the College’s effort to dramatically reduce its carbon emissions.

The third design wraps the side of the bus in flames exhaled by Blaze, with the motto: “Red Dragon Power.” Unlike the other buses, this one is powered by traditional diesel.

The College decided to replace most of its aging campus buses with propane-fueled vehicles last year as part of its Climate Action Plan, which calls for reducing greenhouse gas emissions dramatically in the near term and becoming completely carbon-neutral by 2050.

College officials also saw the new bus purchases as an opportunity to increase awareness of climate issues and SUNY Cortland’s efforts to shrink its carbon footprint and operate sustainably. To do that, the College incorporated the kind of bold, colorful and creative graphics that some campuses have used to promote their sports teams.

“We want students to know that we’re serious about sustainability and are encouraging them to be more aware of the connections between their environment and all aspects of their lives,” President Bitterbaum said. “But we wanted to do it in a fun way that fosters pride in our institution.”

The buses run throughout the school day in regular routes across the sprawling, SUNY Cortland campus.