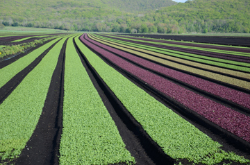 SUNY Cortland sociologist William Skipper will take a look at how human activity has created the ecological crisis the planet as a whole faces today, on Wednesday, April 8, at SUNY Cortland.

This activity can include technologies as well as economic, political and socio-cultural systems and processes. Skipper, a SUNY Cortland assistant professor of sociology/anthropology, will present “Livable World/Livable Planet: The social aspects of ecological sustainability” beginning at 4:30 p.m. in Moffett Center, Room 2125.

A reception will precede his presentation at 4 p.m. in the Rozanne M. Brooks Museum, Moffett Center, Room 2126.

His lecture continues the 2014-15 Rozanne M. Brooks Lecture Series, themed this year on “Culture, Technology and Sustainability.” The series events, which are free and open to the public, explore the present and future on a planet with a rapidly growing population, critical food shortages, climate change and a host of other factors that affect the quality of life across the world. Presenters discuss these issues and offer possible solutions to major global problems, including the role technology may play in helping or hindering progress toward a “livable planet.”

The series also will feature SUNY Cortland students conducting a poster session titled “Can We Sustain?” from 3:30 to 4:30 p.m. on Wednesday, March 25, in the Moffett Center Sociology/Anthropology Lobby. A series of student presentations will follow from 4:30 to 5:30 p.m. in Moffett Center, Room 2125.

Skipper, who joined SUNY Cortland as assistant professor in 2003 after serving three years as a visiting assistant professor, has research interests that include globalization, technological change, offshoring and work and work’s meanings.

A published author of journal articles and book reviews and a contributing editor to Globalization, he has presented at conferences on the effects humans are having on the Earth.

“As a consequence of mankind’s environmental influence, any serious effort to achieve ecological sustainability must include social change globally,” Skipper asserts.

From 2009 to 2012, Skipper was the SUNY Cortland coordinator of the three-year SUNY Global Workforce Project, a collaboration with the Levin Institute and SUNY Brockport to “globalize” undergraduate curricula. The initiative was funded by a U.S. Department of Education Undergraduate International Studies and Foreign Language Program grant.

The 2014-15 Brooks Lecture Series is sponsored by a grant from Auxiliary Services Corporation and the Cortland College Foundation.