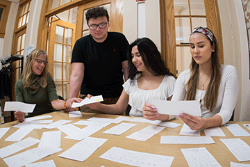 
Students in SUNY Cortland’s Spanish Club are writing letters of support and encouragement to undocumented Latin American workers and families being detained after entering the country at the U.S.-Mexican border seeking asylum.

For some of the letter writers, their own family or immigrant roots has made the unusual project personal.

“As a graduation present my father plans to take me to our home country, which is El Salvador, to see my family for the first time,” said Spanish Club president Michelle Hernandez of Rocky Point, N.Y., a junior special education major with a minor in teaching secondary languages.

“That’s something that’s very important for me to see. My grandmother lives in complete and utter poverty where she has a water person come by daily and give her a bucket of water. It’s in San Miguel, the rough neighborhood she lives in with a lot of the MS-13 gang around. We are so privileged to live in this country and we take a lot of things for granted.”

The club has about 20 members, including many international students from non-Spanish speaking countries.

The students’ 40 colorfully decorated and heartfelt letters, written in Spanish, will be delivered to incarcerated non-citizens who arrived recently on U.S. soil after fleeing extreme poverty and violence.

The letters will reach the hands of the people who need the emotional support, thanks to Detainee Allies, said Spanish Club advisor and associate professor of Spanish Colleen Kattau. The activist organization tracks the location of the Latin American natives held at detention centers pending court hearings on their asylum cases. Each letter will receive the proper postage to reach its intended recipient.

“These are letters to people waiting for a hearing, possibly on deportation,” said Kattau, who has made trips detention centers in Fort Benning, Ga., and Tucson, Ariz., to check out the situation for residents there.

“They are often held for a long period of time and the people don’t know where they are going,” Kattau said.

So what do Spanish-speaking SUNY Cortland students have to say to detainees?

“I’m an immigrant from Costa Rica,” wrote one SUNY Cortland student in a hand-written missive, giving only her first name. “I have 10 years in the U.S. You have a right to be here.”

“I think you can find help here,” another wrote. “Please know there are people on your side.”

“The famous Yankees are playing in my neighborhood of New York,” yet another penned. “I hope you can visit someday.”

Kattau and several Spanish Club members met recently at Kattau’s office in Old Main to place the letters in a large manila envelope to be mailed to Detainee Allies, which communicates directly with detained refugees at the Otay Mesa Detention Center in San Diego, Calif.

“In 2018 I traveled to Costa Rica where I saw under the bridges there was a lot of poverty,” Feinman said. “People live in shacks that are very colorful but so poor. I had to just stop and cry.”

Another student, Camilo Fredes, a senior Spanish and communication and media studies major from Bayville, N.Y., was asked to write the club’s reflection message to accompany the letters.

“I grew up in Chile until 11 years ago and so I’m fluent in Spanish and Chilean slang,” said Fredes, an aspiring journalist. “At my home in Chile, whenever it rained, the whole house flooded. It was pretty bad for my family.”

In the U.S., Fredes said he has worked hard since age 13, not only to help the family, but to excel in sports and studies to win a shot at college.

“That’s why a lot of people come here, too,” Fredes said. “They want to have a better life for their children or grandchildren. In Central America, there are a lot of gangs and the U.S. has caused a lot of civil wars.”

For the parents and grandparents of many of the Cortland letter writers, the journey to the U.S. was a difficult one. They arrived in the worst of circumstances.

Feinman said that her grandparents fled Cuba by boat, but were turned back the first time. Her grandfather did not survive the second boat attempt, but her grandmother succeeded.

Kattau mentioned that it’s primarily people of color who are fleeing their countries.

In addition to the letters, the Spanish Club raised $300 for the Detainee Allies organization to offset expenses and $350 for the Workers Center in Syracuse, N.Y., which advocates for undocumented workers, Kattau said. The club received one major gift from local attorney Joe Heath, who returned the honorarium for his February talk on Attica to help a student organization try advocacy work.

Club members plan to tell their immigration stories to the campus community at the Nuestras Américas conference celebration this October 11-12 during Latinx American History Month.