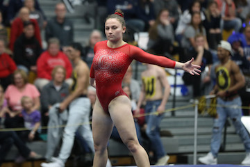 Schulz posted a score of 9.825 to win the title, just ahead of Wisconsin-Eau Claire's Kiya Bjorge's score of 9.80. Schulz is Cortland's first gymnastics national champion since Maddy Scozzie on uneven bars in 2015 and the Red Dragons' first floor exercise champ since Lindsey Marranca in 2005. In all, Cortland gymnasts have now won 17 NCGA national titles (18 overall), and Cortland Athletics now boasts 106 individual national titles across all sports.

"I'm really excited to know the work I put in this season paid off," said Schulz following the meet.
In addition to her national title, Schulz also registered one of Cortland's two national runner-up finishes at the championship. She tied for second on balance beam with a 9.75 along with Ally Blixt of Wisconsin-La Crosse, with Wisconsin-Whitewater's Franchesca Hutton claiming the title with a 9.775. Senior Rachel Filipski (Lancaster) tied for second place on vault, along with Whitewater's Lauren Marshall, with a season-high 9.75. Shadae Boone of Wisconsin-Stout was the vault champion with a 9.825.

Freshman Megan Hanley (Lynbrook/Malverne) narrowly missed All-America honors on beam, tying for ninth place with a 9.625. The All-America cutoff score was 9.65. Other Red Dragon highlights included a tie for 11th for Schulz on vault (9.60) and a tie for 12th place for senior Lindsay Riggs (Rancho Santa Margarita, CA/Trabuco Hills) on floor (9.675).

In addition, Cortland seniors Filipski and Riggs were recognized as NCGA Senior All-Americans in Academics award winners at the meet. The awards go to seniors with at least a 3.0 overall grade point average who appear on the team's NCGA squad list for the current year. The winners must be in their final year of athletic eligibility as well as seniors academically.

"I'm incredibly proud of this team and everything they have accomplished this season," said first-year head coach Sierra Day. "The nationals stage only got a glimpse of what's to come for this program."