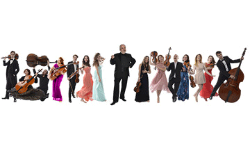 
The Russian String Orchestra, comprised of some of Russia’s finest young string players, will take musicians and audience members alike on a guided tour of Elgar, Shostakovich and Dvorak when they perform on Wednesday, Oct. 16, at SUNY Cortland.

The concert, which starts off the 35th anniversary season of the SUNY Cortland Campus Artist and Lecture Series (CALS), will begin at 7 p.m. in Old Main Brown Auditorium.

Tickets prices are $3 for all students, free for children 10 and younger, $8 for senior citizens ages 60 and older, and $10 for general admission.

Tickets are available electronically through the College Store of SUNY Cortland (select ‘shop’ on the top menu and then ‘event tickets’); or in person between 8:30 a.m. and 4 p.m. Monday through Friday in the Campus Activities Office of Corey Union, Room 406; or at the door one hour before show time.

Founded in 1991 by music director Misha Rachlevsky, and formerly known as Chamber Orchestra Kremlin, the group was renamed in 2006 to celebrate its 25th anniversary. The Russian String Orchestra’s visit represents the ensemble’s first stop on its Fall 2019 American tour.

The orchestra has been described as “addictive,” “creating an atmosphere of warmth and high energy,” and “rousing as well as captivating and moving.” Fans and critics have noted that the music stays with listeners long after the last note has played.

About half of nearly 2,000 concerts the orchestra has performed to date have taken place in Moscow. The rest were played on tours in 25 countries in North and South America, Europe and the Far East.

The emotional high point of the planned SUNY Cortland program will fall on the Dmitri Shostakovich masterpiece, “Chamber Symphony Op. 110 Bis.” Dark and tragic, it never fails to reach every listener in the hall.

Johann Sebastian Bach’s “Contrapunctus No. 1 from ‘The Art of Fugue’” immediately follows the Shostakovich, to help both performers and listeners make the transition to the rest of the program.

Their performance also will include Edward Elgar’s “Serenade For Strings in E Minor, Op. 20.”

More information is pending about the next CALS event, “An Evening with Bill Miller,” which is scheduled for Saturday, Nov. 9.