‘Once Upon A Mattress’ Opens April 5 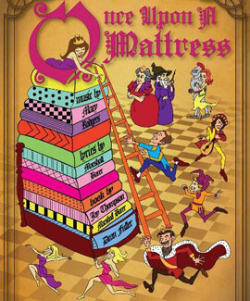 
“Once Upon A Mattress,” the 1959 Broadway hit that has enjoyed popular revivals and television adaptations starring actress/comedienne Carol Burnett, has been updated for six performances at SUNY Cortland beginning Friday, April 5.

The musical comedy, which is a satirical retelling of Hans Christian Andersen’s fable “The Princess and the Pea,” will be staged in Old Main Brown Auditorium at 8 p.m. on Friday, April 5 and 12, Saturday, April 6 and 13, and at 2 p.m. on Sunday, April 7 and 14.

Kevin Halpin, associate professor of performing arts, is the director.

Tickets may be purchased at Jodi’s Hallmark shop on Main Street, Cortland, or at the door immediately prior to each performance. Admission will be $18 for the general public, $15 for seniors and SUNY faculty/staff, and $8 for all students and children. “Once Upon A Mattress” is recommended for all ages.

“We have not done a traditional musical comedy in quite a while, and this one is wonderful,” said Halpin. “It was written in the 1950s and was very up-to-date for its time, and we wanted to be true to that idea. So, we’ve added some modern references and thrown in some twists that work well for today’s audience.”

“One of the biggest crowd-pleasers is the song ‘Shy,’ which is a brassy Broadway number that Carol Burnett really belted out,” said Halpin. “It’s the song that introduces Princess Winnifred to the audience, and it helped make Carol Burnett a star. Other great numbers are ‘Spanish Panic’ and ‘Song of Love.’ Because we’re in Brown Auditorium, we’re staging everything in a style that is more intimate than it is traditionally presented, so it’s going to be a lot of fun for the performers and for the audience.”