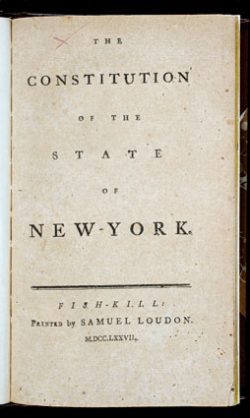 Should new gambling casinos be legalized?

Should judges make decisions until they are 80?

Should the power to draw political boundaries be taken away from elected officials?

With six constitutional amendments on November’s statewide ballot, and two more scheduled for 2014, some of New York’s top constitutional experts will gather at SUNY Cortland Thursday, Sept. 19, to discuss the reasons for these proposals and their potential impact.

The conference also will consider whether voters should hold a state constitutional convention in the next few years to change the fundamental document that has guided New York’s governance for more than two centuries. Syracuse Mayor Stephanie Miner will give the keynote address on the 50th anniversary of Constitutional Home Rule, an amendment that dramatically strengthened the authority of local governments.

People interested in attending can do so here: http://www.surveymonkey.com/s/QX5XV26.

“The time is right for this discussion,” said Henry Steck, Distinguished Service Professor at SUNY Cortland. “On Tuesday, Sept. 17, we will celebrate our federal government’s founding document with Constitution Day, and on Thursday, Sept. 19, we will consider the New York State Constitution. This is our foundational blueprint, the outline of our basic rights as New Yorkers and our governmental how-to manual. Obscure for many New Yorkers? Yes. Critically important? Absolutely! SUNY Cortland is honored to host this important event for the whole community.”

The Cortland conference, titled “A New New York: The Constitutional Dimension,” is sponsored by EffectiveNY.org, Center for Research, Regional Education and Outreach (CRREO) at SUNY New Paltz, the Institute for Civic Engagement at SUNY Cortland and the SUNY Cortland Political Science Department.

The conference will examine the constitutional amendments that will be on the statewide ballot in November. It will look ahead to 2017 and the required ballot initiative asking voters to consider whether to hold a constitutional convention to weigh critical state government reforms. The event also will address Constitutional Home Rule, which is celebrating its 50th anniversary this year.

“In 2017, as it is every twenty years, the question of whether or not to have a state constitutional convention will be on the ballot for voters to decide,” said Assemblywoman Barbara Lifton of the 125th Assembly District. “It is not too early to begin the discussion about what is at stake in that decision, and so I’m glad to be part of this panel with people of diverse views which will, I hope, begin to educate New Yorkers about both the potential and the pitfalls of such a state convention. I am confident it will be an interesting discussion.”

The conference speakers and panelists will include:

“Few people understand the crucial role of state constitutions in our federal system,” Benjamin, of SUNY New Paltz, said. “The unprecedented number of constitutional amendments proposed to the voters by the legislature this year and next offers a special opportunity to educate the public on what is in the State Constitution, why it is there, whether change is needed, and if so, how it may be achieved.”

"Elected representatives should not only uphold the State Constitution, but give thoughtful and comprehensive consideration on reforms that serve the public’s best interest,” said New York State Assembly Minority Leader Brian M. Kolb, R,C,I-Canandaigua. “With six constitutional amendments to be voted on this fall, I look forward to an engaging and open discussion about these critical issues. This forum in Cortland is an opportunity to further discuss reforming our state government and the potential need for convening a constitutional convention in 2017.”

“We are pleased to help fund the conference,” said Bill Samuels, co-founder of Effective NY and founder of New Roosevelt. “Continuing to improve upon our State Constitution is essential to maintaining a vital and efficient government in Albany for the people. Reforming the constitution is a key step in helping to restoring trust and confidence in Albany and to make it the best legislature in the country.”

The conference will feature two panel discussions. The first will focus on the constitutional issues in anticipation of the 2013 November election, where voters will consider ballot initiatives dealing with the State Constitution. The second considers more generally what could, or should, be removed from the current constitution in a future constitutional convention.

New Roosevelt Foundation has helped provide funding for the conference.

If you are a member of the media and would like to attend the conference or speak to any of the experts involved, please contact: Jay Strell, Sunshine Sachs at strell@sunshinesachs.com or 212.691.2800.