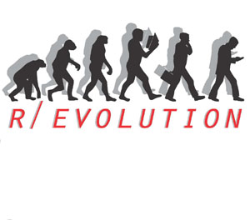 
SUNY Cortland’s yearlong series on the theme of “R/Evolution” continues questioning the notion that evolution represents positive change with a number of book and staged readings, film screenings and discussions in spring 2015.

Presented by the College’s Cultural and Intellectual Climate Committee (CICC), the events are free and open to the public.

The CICC members assert that, despite “r/evolution” in the ways that humans operate in the world, certain issues seem to reassert themselves as timeless problems.

“We have seen a revolution in the ways we communicate, but has the nature of our communication changed?” observed committee co-chair Scott Moranda. “Political theories evolve, but are they more than variations on older philosophies? Language has evolved, but to whose benefit? Scientists make new discoveries about the workings of our world, but do these lead to change for the better?”

Campus and community members are invited to read several books on their own to prepare them for classroom and group discussions. Information on these “common reads” can be found at CICC’s 2014-15 Common Read webpage.

The “common read” literature includes “Inherit the Wind,” by Jerome Lawrence and Robert E. Lee, a dramatic rendering of the 1925 Scopes “Monkey” Trial. This actual court case saw a teacher convicted for teaching Darwin’s theory of evolution, a violation of Tennessee state law at the time. At root, the play stands as a defense of intellectual freedom; as playwright Jerome Lawrence told The New York Times in 1996, “It is about the right to think.”

The second “common read,” David Sloan Wilson’s book Evolution for Everyone, speaks to non-scientists and scientists alike. Rather than dwell on the debates about creationism, this collection of essays shows how evolution provides a framework for investigation in many disciplines.

Wilson, who will visit the campus at 4:30 p.m. on Thursday, April 23, to talk about his scholarship in Old Main Brown Auditorium, proposes that evolutionary biology might help us better understand religion, culture, psychology and morality.

The third “common read” is a collection of 27 essays geared for a general audience, The Best American Science and Nature Writing 2013, edited by Siddhartha Mukherjee. The essays explore how science happens rather than simply presenting solitary facts. “(The essays) describe the extraordinary process by which scientists extract those facts from the grim soil, roots and tendrils intact, to glean knowledge about the inner workings of nature,” Mukherjee wrote.

Also during February, a historian, a biologist and an economist will address “r/evolution” in lectures from their unique viewpoints.

On Thursday, Feb. 19, University of Kansas historian Edmund Russell will lecture on the benefits of writing history at an evolutionary scale, as well as on the possibilities of interdisciplinary cooperation between historians and evolutionary biologists. His talk, “Co-evolutionary History,” begins at 4:30 p.m. in Brockway Hall Jacobus Lounge.

Russell, the Joyce and Elizabeth Hall Distinguished Professor of United States History at University of Kansas, has focused his research and teaching on environmental history, the history of technology and the history of science.

“Russell’s work should prove provocative to students and faculty members in the sciences and the social sciences, and his talk will compliment the lecture later in the semester by evolutionary biologist David Sloan Wilson,” Moranda said.

Russell is the author of prizewinning published works, including the 2001 text War and Nature: Fighting Humans and Insects from World War I to Silent Spring, which won the Edelstein Prize; and the 2003 book, Evolutionary History: Prospectus for a New Field, which captured the Leopold-Hidy Prize. He also wrote the 2011 work, Evolutionary History: Uniting History and Biology to Understand Life on Earth. Russell has received university and state awards for his teaching.

The talk is co-sponsored by the History Department and the Campus Artist and Lecture Series.

An international expert on conservation biology from the SUNY College of Environmental Science and Forestry (ESF) in Syracuse, N.Y., will discuss some of his latest research on Wednesday, Feb. 25.

Gibbs has investigated amphibians and the Eastern Massasauga rattlesnake in central New York and has practiced in more exotic locations. In the Altai Mountain regions of Russia and Mongolia, he has encouraged anti-poaching practices on snow leopards. In the Galapagos Islands, he has worked to protect the giant Galapagos tortoises.

An economist will address her discipline’s order as a central aspect of human evolution on Thursday, Feb. 26.

Lisi Krall, a SUNY Cortland professor of economics, will present “The Economic Evolution of Dominion” at 4:30 p.m. in Brockway Hall Jacobus Lounge.

“Our evolution as a species is not simply a matter of the evolution of our genome, it is a matter of our social evolution,” said Krall, the author of Proving Up: Domesticating Land in U.S. History, which explores the interconnections of economy, culture and land in U.S. history.

Krall’s present research uses evolutionary biology, anthropology and heterodox economics to explore the expansion in human territory and possessions as well as the profound interdependence of individuals in economic life that began with the advent of agriculture. She has focused on the particular form this dynamic takes under capitalism.

“The most profound manifestation of our social evolution is found in the economic configuration of society,” Krall said. “Understanding economic order as a central aspect of human evolution provides insight into our tragic historical moment.

“As we mindlessly orchestrate climate change and the sixth great mass extinction with our economic order, we also confront the possibility that our Pleistocene genome is at odds with our economic evolution. The challenge of sustainability is to reckon our complex evolutionary history.”

Krall has collaborated on books projects, seminars and workshops with The Evolution Institute, The Foundation for Deep Ecology, The Post Carbon Institute, The Population Institute and The International Forum on Globalization. She serves on the boards of the Center for the Advancement of the Steady State Economy, the United States Society of Ecological Economics and the Agrarian Trust. An associate fellow with the Center for Great Plains Studies, she is a member of the Science Advisory Board for the Evolution Institute. Krall recently gave the Strachan Donnelley Lecture at The Land Institute’s 2014 Prairie Festival.

As the series continues, details about scheduled March and April presentations will follow in the Bulletin.