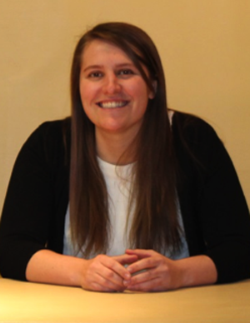 The junior business economics and communication studies dual major has been named a 2014 Campus Compact Newman Civic Fellow largely on the strength of the business development work she tackled as an AmeriCorps member last year.

LaFreniere, of Albany, N.Y., joins a group of 197 students nationwide to receive the honor. She is the first SUNY Cortland student to earn the distinction.

“I think I really liked getting to know more about the town,” said LaFreniere, who worked with the Cortland Downtown Partnership from February to December in 2013. “As students, yes, we go downtown to eat and learn different things about local businesses.

“But what’s great is when you get the time to stop in on a Monday morning when there aren’t too many people downtown and talk to (business owners) about what they need help with or how they’re doing or what they’re doing that might help other small businesses in town.”

The Newman Civic Fellows Award recognizes civic engagement and a student’s motivation to create lasting change. During her AmeriCorps stint, LaFreniere worked on several events that bring visibility to downtown Cortland such as the summer’s Taste of Downtown and the winter’s Chill-A-Bration.

“(The experience) opened a lot of doors,” she said.

LaFreniere is one of five students currently working with Professor of Economics Kathleen Burke on a project tied to the Cortland Corset Building on East Court Street. The group is developing a marketing strategy for the building in addition to providing help for the individual businesses inside of it.

LaFreniere also has secured a summer internship with the Albany Business Improvement District, an organization that promotes a lively downtown in New York state’s capital.

“Albany obviously is a lot bigger,” said LaFreniere, who recently was elected treasurer of the College’s Student Government Association. “It probably will be a lot different from what I saw in Cortland.”

Still, that initial experience working with businesses in downtown Cortland did wonders for her, both in terms of securing the Newman Civic Fellow Award and lining up future internships.

The Newman Civic Fellow Award is named after Frank Newman, the co-founder of Campus Compact and an advocate for civic engagement. A national coalition of more than 1,100 college and university presidents — representing roughly 6 million students — makes up Campus Compact.