Homelessness and the dark side of home 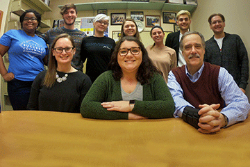 
Joseph Ferrari M ’81, a DePaul University psychology researcher and internationally respected expert on the causes and consequences of chronic procrastination, didn’t learn that one of his doctoral students was homeless until two years after the promising scholar had earned his Ph.D.

Ferrari never suspected that the student was quietly going through a family crisis and hiding his desperate financial situation, receiving help from others on DePaul’s massive urban campus in Chicago, Illinois.

“My student used to sleep on campus, and at 5 in the morning, one of the security guards would wake him up,” said Ferrari, a St. Vincent dePaul Distinguished Professor of Psychology. “He became friends with them, the security guards. Then he would go to the gym and take a shower.”

That experience helped influence Ferrari, a Roman Catholic deacon who has built a career as a world-famous researcher, writer and authority on the human tendency to procrastinate, to shift his research focus to the concept of home.

Specifically, he finds himself intellectually pulled between the circumstances of homelessness on one hand and the tendency of people to associate “home” with accumulations of possessions that often become too large to comfortably manage.

“I’m interested in what you call the psychological meaning of home,” Ferrari said. “We travel and we can’t wait to go home. Home is not a physical place; it can be something else. I remember giving a talk and someone said, ‘I grew up in the military and we had a home but we moved around all the time.’ So home is not a physical structure. I wondered, what does that mean to be home?”

In some ways, the new direction is a departure for Ferrari, who visited the SUNY Cortland campus in 2007 to speak about procrastination. Since then, he has penned a consumer-oriented book on procrastination, Still Procrastinating? The No-Regrets Guide to Getting it Done (John Wiley & Sons, Inc., 2010). His “Procrastination” segment on the “Academic Minute” podcast received the most visits in 2018 of any of the daily program’s productions. It was rebroadcast in December 2019.

And the social community psychologist remains a frequent presenter on his pet topic. Since 2007, he has given 17 professional conference keynote addresses on the topic around the world including in Italy, Germany, Australia, Ireland, Peru and Saudi Arabia.

But in other ways, the idea of “home” is just another aspect of the mysterious tendencies and capacities of human nature that Ferrari has studied since his days at SUNY Cortland.

Ferrari began his graduate studies in experimental psychology at Cortland under the direction of Professor of Psychology Emeritus Paul Luyben.

“It all comes back to Cortland,” Ferrari said, recalling Psychology Department mentors who believed in him and set him squarely on a lifelong career in academic research.

Ferrari, who for 25 years has edited the Journal of Prevention and Intervention in the Community, was ordained in 2013 as a permanent Roman Catholic deacon serving the people of Joliet, Illinois.  Perspectives gained from those roles have led him work to help homeless people even as he studies them and their circumstances. And one of his priorities are hidden housing casualties such as his former Ph.D. student.

“One of the last politically correct/incorrect insults to say to somebody is “You are homeless,” as if you’re saying, “You’re ‘less’ than other people because you don’t have a home,” he said. “What we’re doing this year, my research team, is a needs assessment. We’re looking at homeless college students.”

DePaul University, with a 22,000 student body, identifies about 50 homeless students enrolled each quarter. As a starting point, Ferrari and his students are seeking insight through a five-year-old nonprofit program, run by the St. Vincent DePaul Society. The program sets up stable and safe housing and other services through graduation for students without a place to live.

Ferrari pointed to a growing nationwide trend of good students leaving college for financial reasons, and said schools need to address it.

“There’s a number of simple little things that schools can do,” he said. “Just brainstorm, be open to it, if it serves people. Life is not about me, life is about we, and we need to emphasize that more. That’s my role as a community psychologist. How are you making a difference in the lives of other people?”

Ferrari doesn’t yet have results on this investigation. He also gains insight through his participation in a Chicago non-profit agency’s program of weekend spiritual retreats for homeless adults, working specifically with men.

“It’s fascinating to be there, because on Sunday morning, some of them come down and say, ‘I had a bed last night, and it had a mattress! I had two pillows! I could have seconds on my meals here.’

“It’s very humbling to work and to hear their life stories,” he said. “All the petty problems I have, that puts it right in perspective.”

At the opposite end of the spectrum from homelessness is clutter, in which people grapple with the pressure that modern American society places on them to acquire more possessions than they need.

Ferrari described clutter as “the danger of the totality of one’s possessions being so overwhelming that it chips away at your well-being, relationships, and more, drowning in a sea of stuff,” in the 2016 paper he co-wrote, titled “The Dark Side of Home: Assessing Possession ‘Clutter’ on Subjective Well-Being.”

Ferrari decided to focus on clutter while at a meeting of the Institute on Challenging Disorganization, where — as one of the world’s foremost experts in procrastination, a human tendency often naturally leading to clutter — he gave the keynote speech. There he met the organization’s go-to person for research, Catherine Roster, a professor of marketing at the University of New Mexico, and they embarked on their first study.

According to Ferrari, there is a danger in identifying too strongly with possessions, which can disrupt one’s life where it hurts the most: a sense of home.

“We looked at a group of around 1,600 people who have a clutter disorder, a clutter problem, and asked them what is their life satisfaction,” Ferrari said. “Then we published our paper, which got a lot of media coverage. We found that the more you possess, the weaker your sense of home, the less your satisfaction of life.”

Their findings on clutter also were shared through an article in a 2018 special edition of Current Psychology that focused on procrastination, clutter and hoarding.

“Hoarding and clutter aren’t the same thing,” explained Ferrari, who hasn’t studied hoarding, a recognized psychological disorder. “Hoarding is lots of the same thing. Clutter is a lot of breadth, just a lot of stuff. People can have both. One is vertical, one is horizontal. Clutter is wider.”

“We’re hit in this country with consumerism,” Ferrari said. “Merchants take our wants and make them needs: these possessions make our life complete. But the data shows the more you have, the less satisfying life you have. As a clergyman, I’ve looked at the spiritual side of these things. We can have abundance. It’s the attachment to abundance that’s the problem.”

Ferrari’s team soon will release a paper on technology clutter which can lead to less productivity in offices.

“This is all new stuff that has never been covered before by researchers,” he said.

“What’s the meaning of home to people who immigrate?” he said. Ferrari held a sabbatical in 2019 in Genoa, Italy. “In the U.S., we talk a lot about people coming from South America, Central America. In Italy, the big issue is immigrants coming from Africa. My colleague in  Italy and I are planned this new study on the meaning of home for immigrants. I have a couple of grad students working on that.”

In the above left image, Joseph Ferrari M ’81 appears on the right in the foreground with members of his research team, which has five undergraduate psychology majors, two graduate general experimental psychology majors and four doctoral candidates in community psychology.