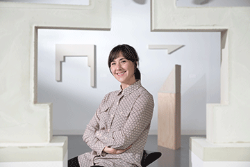 
They say that an effective work of art talks to people.

“I think there’s a noise coming from one of your sculptures,” a Lycoming College art gallery staff member had told Ramsdale in a phone call about a piece in her solo exhibition there a few years ago. The artist recently shared her story about the work — a melding of very stylized Target store clearance items with sections of bark-coated tree stumps — during her first professional solo exhibit at her alma mater.

Ramsdale had carefully sanded and colored the eclectic pillar into a slow fade of subtle shades at her studio which was in rural Maine at the time, and she knew that she hadn’t hidden any kind of audio device in it. Moreover, student workers complained of having to continuously sweep up a growing ring of sawdust around the creation’s base. Chagrined, Ramsdale returned the termite-riddled gallery piece to her studio.

“As we took it away, I could hear a woodpecker sound coming from it,” said Ramsdale, whose current solo exhibit “Form & Forever” is on display at SUNY Cortland’s Dowd Gallery through Friday, Oct. 5. It’s her first exhibit on campus since her Student Select contributions as a senior.

Ramsdale, who also studied at Goldsmiths College in London, was nominated for a Terra Foundation for American Art Award and an Outstanding Student Achievement in Contemporary Sculpture Award from the International Sculpture Center. Subsequently, she received two Pollock-Krasner Foundation fellowships for residencies in Upstate New York.

Recent shows include a group exhibition at Savery Gallery in Philadelphia and a solo exhibition at The Gallery at Delaware County Community College. Ramsdale recently completed a residency at Joya: arte + ecologia, an arts-led field research center, in Andalucia, Spain.

Some people in the art world compare Ramsdale’s sculpture to the famous Romanian sculptor Constantin Brancusi, a pioneer of modern sculpture.

On the whole, Ramsdale is ever changing and evolving and is comfortable with unexpected reactions to her sculpture and art installations as well as nature’s interventions.

“I really struggled with having a lack of control,” at the mainly outdoor studio in Maine, Ramsdale said. “I had to deal with things like rain and fog and humidity. There were days I spent just staring out at them waiting for the rain to pass and wondering if I would make my deadline. What I was trying to achieve was to get a really perfect fade line. But the wind would pick up and mess up my fade line.”

Ramsdale explains that the process by which she constructs these sculptures allows the form to reveal something that is not entirely intended, perpetuating a dance between authority and a lack of control over the object.

The former studio art major’s artistic direction was strongly influenced by SUNY Cortland Emeritus Professor of Art and Art History Alan Mooney, but she is always open to an interpretation she didn’t expect.

“Like this family of trees for example,” Ramsdale said as she showed a slide of her past work to a standing room-only crowd for her recent SUNY Cortland artist’s talk in the Dowd Center critique space. Ramsdale’s slide showed a grouping of three tri-forked tree limbs embellished with clearly man-made flourishes.

“This work was actually in response to a kind of traumatic event in my life and the sentiment was intended to be quite serious,” Ramsdale said.

“But one of the things I realized was that a lot of my peers at school actually saw a lot of humor in the work. That’s something that I’ve had to get over and deal with, that not everything that you put out there in the environment is going to be received in the way that we think it is going to be.

“I think it’s funny when we make something and then stand back and it’s kind of laughing in your face.”

She advised the prospective artists listening to her talk to allow themselves to experiment with art and be open to how it will be received.

Ramsdale originally pursued graduate work with the intent to become an architect. That has heavily influenced her interest in mastering new areas of traditional craftsmanship while using readily available building materials. “Form & Forever” represents her experimentation with carefully molded concrete. In the course of the work, Ramsdale admits she became fascinated with the shapes of her constructed scaffolding and eventually some of that was incorporated into the Dowd Gallery exhibit as well.

“I began this research on cars by dissecting the anatomy of a car and I stumbled upon these really incredible stock car chassis or race car chassis,” Ramsdale said. “I fell in love with them. I thought they were really beautiful, three dimensional drawings in space. For me they read as sculptures in and of themselves. I loved the line quality, the structure of them and the fact they were often powder-coated really wild colors.

“All of this mashup of interest in movement-interior-furnished space kind of culminated in machines that transport, machines that move,” Ramsdale said, describing her artistic journey. “I think cars equates anything that kind of relocates us from one location to another. Then later on, what could possibly move us metaphysically from one place to another?”

In order for her to pretend that these machine-like objects could actually do something, it was important to Ramsdale that they seem viable, so during one phase she added light back into her sculpture.

“I was adamant about not plugging it into an outlet because the minute I did, it would seem like an oversized toy. So, I figured out how to run the fluorescent lights off a car battery which was hidden in the back of the sculpture. So, one could circumnavigate the work and it was kind of self-sustaining.”

Eventually the Philadelphia-based artist was invited to have her first exhibition at nearby Delaware County Community College.

“I knew I wanted to make a new and fresh body of work,” she said. “I knew that I wanted to make a series of sculptures that were confronting but suggestive of speed and time. My exhibition “Seven” was born out of that and there’s four sculptures in the show here. My former painting professor, (the late) George Dugan, in an email described her display as ‘Not minimal but subtle, architectonic but with a Zen simplicity.’

“I couldn’t have said it better,” Ramsdale said, noting that Dugan had continued to guide her post-graduation artistic journey until the end of his life.

Ramsdale wasn’t always going to become an artist. After graduating from Cortland, she was renovating an old house with her father in Upstate New York, learning how to use the machinery along the way, when she took a Harvard University summer class to prepare a portfolio to get into architectural school.

“It was there that I actually realized I did not want to be an architect, in that my interest really aligned with raw materials and the materials that were used to build buildings and space, rather than the design of the spaces themselves,” she said. Ramsdale set a goal to become a better fabricator, object maker, sculptor and builder.

“I really wanted to figure out how to build these complex angles with minimal equipment: a chop saw, a circular saw,” she said.

More recently in her career, just when it seemed like she had mastered working with many different kinds of construction materials, she took a step back.

“I decided to apply to a residency in southern Spain, in the mountains, completely off the grid,” Ramsdale said, referring to her Joya: arte + ecologia experience. “It was absolutely not for me and that was why I applied to do it.”

The studio was at an old almond tree farm. Ramsdale brought with her a duffle bag with a very large roll of black paper and white paper, some tape and scissors. She looked over her studio.

“It was really just a beautiful room and that was it,” she said. “But if you stay with it, and I did, things began to percolate. It was different than things I was used to but it touched on some of the darker things I had been working on.”

Ramsdale created a series of large, puffy rock- or mountain-like objects mounted between a floor and one wall of a gallery. These are among her most striking pieces. These works explore whether art needs to build on an underlying structure.

“It was, in the end, a really incredible and liberating experience,” Ramsdale said. “Knowing that I could still achieve a body of work and still touch upon some of the subject matter that I had carried with me when I had all the facilities. It built some confidence.”

Some of her earliest memories of being thoughtful of time and space dates back to her teenage years of playing Atari in her finished basement, Ramsdale said.

“What I really loved about these … games was that it seemed to me like I could move through almost infinite portals of space. This was just you moving through a quiet space and almost meditating on a blinking cursor or blinking square. And that was really appealing to me.”

Ramsdale, who returned to Cortland the week after her gallery talk to offer a workshop on installation art in the critique space of Dowd Fine Arts Center, advised the budding studio artists not to become discouraged when they see someone succeeding with art resembling their own.

“I’ve made something and then found something like it in a gallery,” Ramsdale said. “And I say, ‘I guess we share a brain.’ Those galleries will want to show you as well.”

You will brush up against other artists for a time and often it lasts just a few minutes but make the most of getting to know that artist, she advised.

“There’s a tribe of people who go in a pack,” she said. “It’s about finding who your tribe is and follow them. Don’t give up on your work because you think it’s not original. Stay with it and eventually it will become your own.”

Presented by Dowd Gallery and the Art and Art History Department, the exhibition is co-sponsored by the Sesquicentennial Committee, which has included the event among an ongoing series of intellectual and cultural events during the 2018-19 academic year to celebrate the College’s rich 150-year history.

Gallery exhibitions and all programs are free and open to the public. Gallery hours are 10 a.m. to 4 p.m. Monday through Friday and by appointment. Contact Prihodova at 607-753-4216 for more information or regarding group tours.