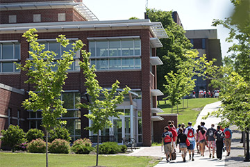 
SUNY Cortland has once again been listed among the nation’s best colleges by U.S. News & World Report, Money magazine, The Princeton Review, Washington Monthly and other publications that annually rank the top campuses in the United States.

In U.S. News’ list for 2017, the College improved its ranking by 13 places, leaping from No. 74 to 61 in the news organization’s ranking of the best four-year colleges in the North. There are approximately 1,500 higher-education institutions in the Northeast, and more than 4,000 colleges nationwide.

“Each of these organizations looks at a different mix of factors when assessing colleges, yet all consistently include SUNY Cortland as one of the top four-year schools in the United States,” President Erik J. Bitterbaum said. “I think that says a lot about Cortland as a well-rounded institution that offers a valuable educational experience at a reasonable cost.”

U.S. News & World Report. In addition to ranking SUNY Cortland at 61 in its list of top Northeastern colleges, it ranked Cortland as 16th best among public colleges in the Northeast.

The publication looks at more than a dozen weighted variables ranging from acceptance rate to availability of financial aid, then factors in the positive or negative perceptions of leaders at peer institutions. The result, according to U.S. News, is a good measurement of academic value.

Money. The magazine recently included SUNY Cortland among the top 25 percent of all colleges in the United States (404) in 2017. Money’s ranking system looks at educational quality, affordability and alumni success to help determine the career value students get for the cost of attendance.

Washington Monthly. The magazine listed SUNY Cortland in the top 10 percent of all colleges in the northeast (89th) under the category “Best Bang for the Buck.” In addition to educational strength and affordability, Washington Monthly looks at things such as service learning and research to determine how much a school contributes to the success of the country as well as individual students.

The Princeton Review. The Review, which offers information and assistance to students in choosing colleges, named SUNY Cortland one of the best colleges in the Northeast in its 2017 review. In addition to basic academic and economic data, the organization relies heavily on surveys with thousands of students across the country.

The Sierra Club. Cortland was ranked 54th among the more than 200 colleges on the Sierra Club’s “Cool Schools” list, which highlights colleges that have successfully integrated sustainable, earth-friendly practices in areas ranging from energy to campus food.

Consumers Digest. In a special report, the organization named SUNY Cortland as one of the nation’s 50 “best values” among public colleges and universities, recognizing the institution as a leader in providing affordable, high-quality education.

The Environmental Protection Agency. The federal watchdog named SUNY Cortland the green power champion of the State University of New York Athletic Conference, recognizing the College for using more renewable energy than any of the 10 schools in the SUNYAC.

NCAA. SUNY Cortland is one of only five schools nationwide — and the only New York institution — to place in the top 25 of the Learfield Sports Directors’ Cup competition each of the 21 years the standings have been compiled for Division III. This year was no different. The cup is given to recognize the overall excellence of a college’s athletics programs.

BestColleges.com. This year ranked SUNY Cortland 23rd out of more than 300 New York colleges, based on academic programs, cost and student life. Last year, two special reports by the group put the College in the national spotlight. First, BestColleges.com named SUNY Cortland one of the nation’s top 50 small-town schools based on the College’s high level of student involvement in the community, the availability of local outdoor education opportunities and its environment for student success. Second, it rated SUNY Cortland as one of the greenest colleges in the United States. The national ranking looks at how successful campuses have been at implementing environmentally sustainable practices and policies. The College was the only SUNY institution on the list, and one of only four institutions from New York state to make the grade.