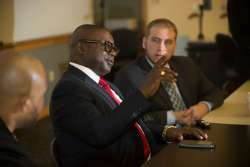 
In preparing to represent the West African country of Cameroon during an upcoming Model United Nations (MUN) trip to New York City, student members of the College’s team asked their faculty advisor about the most crucial duties of a diplomat.

Advisor Dennis Weng decided to go directly to the source. He began a flurry of phone calls and email messages that eventually resulted in one of Cameroon’s diplomats driving up to Cortland from the country’s New York City embassy several days before the National Model United Nations (NMUN) Conference, which took place March 27 to 31.

“The best way to get students involved is to help them find what they’re interested in,” said Weng, an assistant professor of political science at the College. “Some are interested in a career in international affairs so I thought why not contact a real diplomat and see how he or she responds.”

Eventually, on the Friday before the College’s spring break started, he received a reply. Cameroon’s ambassador to the UN, Michel Tommo Monthe, had noticed the multiple requests. Not only did he invite SUNY Cortland’s 18 MUN participants to tour the New York City embassy during their visit, he also offered to send a diplomat to the College to answer questions and help students prepare for their role.

That’s why Nganje Kinge Monono, a second counselor at the Republic of Cameroon Mission to the UN, drove up to Cortland on March 22.

“We’ve never had the opportunity for a diplomat to come to Cortland, so just getting him here was a huge feat in itself,” said Corey Morris, the student president of MUN and a dual international studies and business economics major from Henderson, N.Y. “Our club also has nine members from international countries, so they appreciated how big of a deal it was.”

Student MUN members have spent the semester researching Cameroon, a culturally diverse nation of more than 22 million people, and preparing position papers in two-person groups modeled after the UN’s actual committees, Morris explained. While in New York City, the students pretended that they are from Cameroon while addressing topics such as sustainable energy, drug trafficking and healthcare.

Monono spent time with faculty members from academic departments that included Africana studies, international studies and political science. He answered student questions in small group and large lecture hall settings inside Sperry Center. Roughly 30 students attended his public talk. They asked about his path to becoming a diplomat, his most important duties and some of his job’s biggest challenges.

“It’s an art,” Monono said of his profession, emphasizing the importance of speaking, writing and effective negotiation skills. “I represent my country. I represent my government. I always have to remember that.”

His remarks offered an insider’s perspective of diplomatic immunity, the resolution process and the future of the UN.

“What you’re doing with Model UN goes a long way in educating what it’s like to be a diplomat,” Monono told students. “With Model UN, you start to understand (the UN) still is very relevant today.”

The rewards of his job are numerous, he said, but so are its difficulties — namely the time demands, living apart from family and maintaining a public image that represents Cameroon well. He fielded a question about the potential for a personal opinion to conflict with the nation the person represents.

“It’s sometimes hard for your personal opinion to be understood as your own,” he said. “Don’t forget that you’re representing a country and the country’s interests are bigger than your own.”

Weng said he was impressed by the turnout of SUNY Cortland students, the thoughtful questions that they asked and their interest in careers related to international affairs. He particularly was moved by an exchange between Monono and Welly Ekoumilong, a senior international studies major from New York City whose family came to the U.S. from Cameroon.

“I’m happy I had the opportunity to shake his hand,” Ekoumilong said. “He remembered my family and my mother still keeps up with the politics of Cameroon so it was very special.”

Weng said the practice for the MUN conference also opened students’ eyes to a potential career path in international affairs.

“I think students learned that being a diplomat can be a proud career if you love representing your country but that you also need to have passion because it’s not always pretty,” Weng continued. “I think they saw that it’s inspiring and it’s work worth doing.”