Cortland in the News 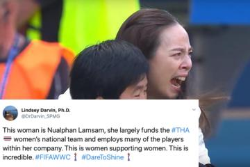 
On June 16, Thailand's Kanjana Sungngoen scored a late goal in a 5-1 loss to Sweden in the group stage of the Women's World Cup being played in France. It was a pivotal moment for Thailand, which had lost to the United States, 13-0, just a few days earlier. Cameras cut to the sidelines to capture the emotional response from coaches and teammates.

One woman in particular, Nualphan Lamsam, was among them. Although the broadcasters did not know her role in growing women's soccer in Thailand as general manager and financial benefactor, Assistant Professor Lindsey Darvin of the Sport Management Department did. Darvin's tweet on Lamsam has generated 3,200 likes and 1,100 retweets and resonated with soccer fans across the globe.

Darvin is working with Ann Pegoraro, an associate professor of sport management at Laurentian University in Ontario, Canada, to analyze the social media response to the U.S. team's goal-scoring celebrations in its 13-0 win over Thailand. Their goal is to shed light on the perceptions and stereotypes associated with women's sport and the cultural differences that may influence athlete and team behaviors.

This woman is Nualphan Lamsam, she largely funds the #THA women’s national team and employs many of the players within her company. This is women supporting women. This is incredible. #FIFAWWC #DareToShine https://t.co/i5l5J7vwP1

Do you know the rules for unusual plays? 🥵

In this clip SUNY Cortland's Fran Elia takes a look into some unusual plays on the field and helps you understand exactly what is going on.