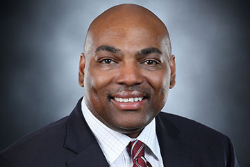 
James A. Felton III has been appointed as chief diversity officer of SUNY Cortland, bringing more than two decades of experience in helping colleges become more diverse, inclusive and equitable.

Felton, who previously served as the first chief diversity officer at Anne Arundel Community College in Maryland, began his new position at SUNY Cortland on May 1.

“SUNY Cortland has made progress in diversifying our student body and creating a more inclusive campus culture, but we still have much to do,” President Erik J. Bitterbaum said. “James will play a leading role in identifying specific goals, objectives and strategies aimed at insuring that Cortland is a place where ALL students, staff and faculty can thrive and succeed.”

As chief diversity officer, Felton will report directly to President Bitterbaum. He will assess, update and implement the campus-wide Diversity Strategic Plan, collaborate with student organizations, academic departments and programs, and develop partnerships within the greater community.

The ultimate goal is to make the campus more welcoming to people from different races, religions, social backgrounds, sexual and gender identities and abilities.

“The values of a diverse campus are endless, just in terms of that whole global leadership perspective: to have an exchange of ideas and worldviews that are different from one’s own,” Felton said. “We want to be able to get out of our comfort zones and have meaningful exchanges and lifelong relationships with people who have a different social-lived experience.

“I also think it just adds to the campus culture in terms of the level of visibility as well as different types of programs and activities and initiatives that take place throughout the year.”

Prior to becoming the inaugural chief diversity officer at Anne Arundel, Felton directed the department of intercultural affairs at Western Carolina University in Cullowhee, N.C., and coordinated the American Intercultural Center at the University of Wisconsin-Green Bay.

He has served since 2015 on the editorial board of INSIGHT into Diversity Magazine, higher education’s oldest and largest diversity publication, and co-wrote a newly released book, Inclusive Directions: The Role of the Chief Diversity Officer in Community College Leadership (NY: Rowman & Littlefield, 2017).

Since 2014, Felton has been a member of the National Advisory Council for the National Conference on Race and Ethnicity. A frequent conference and workshop presenter, Felton last fall participated in the White House Convening on Diversity and Inclusion in Higher Education, sponsored by the White House Domestic Policy Council in partnership with the U.S. Department of Education.

His SUNY Cortland appointment demonstrates the College’s commitment to the SUNY Trustees’ Diversity, Equity and Inclusion Policy, adopted in Fall 2015, which calls for each campus in the 64-institution system to staff a chief diversity officer.

“I think it’s a really great time to be in the SUNY system,” Felton said. “They’ve made a bold, courageous and intentional decision with the current SUNY System Diversity Policy as well as charging each of the institutions in the system to come up with their own strategic diversity plans.”

Felton will oversee the strategic implementation of the campus plan, working with faculty, staff, students and the administration to promote diversity, equity and inclusion throughout the institution.

He’s talked with Carlos Medina ’78, the SUNY system’s vice chancellor and chief diversity officer, who also is a graduate of SUNY Cortland.

“I look forward to partnering with him, as well as some of the other CDOs across the SUNY system,” and attending Medina’s annual diversity conference, Felton said.

“The strength of coming into the SUNY system is that although we may be one or two at each campus, we have an entire system of talent, of expertise, and resources to be able to leverage this work in ways that are mutually beneficial to our students as well as our faculty, staff and community stakeholders,” Felton said.

At Cortland, the role of chief diversity officer was previously held by Noelle Chaddock, and was housed within the Division of Student Affairs in Corey Union. The social components of fostering a diverse and inclusive campus, especially among students, will continue through Student Affairs’ Multicultural Life and Diversity Office. Chaddock had also served as director of that office, a post now held by AnnaMaria Cirrincione.

Felton will work collaboratively with that office in a somewhat different capacity than his predecessor.

“As we move towards models of inclusive excellence in higher education, chief diversity officers are charged with looking at policies, practices and procedures that impact the working as well as the academic conditions for everyone at the institution,” Felton explained.

He’s had initial conversations with Human Resources about fostering pipeline programs in staff recruitment and retention as well as refining search-committee training focused on conscious and unconscious bias in hiring decisions.

“We have to establish connections and relationships across the country as well as around the world,” Felton said. “I have some particular expertise in creating those types of programs, in particular for faculty development.”

Workforce inclusiveness is not a unique challenge to Cortland, Felton said.

“All institutions are faced with trying to increase the diversity of their workforce. The time is now in order to build that foundation. But if we wait until our student diversity — the minority becomes a majority — then it’s too late.”

Felton also will influence Student Conduct Office policies. He oversees the College’s protocol for responding to reports of bias.

“I’m in talks with folks in Student Affairs as well as the leadership about creating a more formal process,” Felton said. “And not just a sanctioning process, but also an educational team to help the campus understand what bias is and also what bias is not.”

Felton’s interest in diversity began when he was a college student with a relatively narrow focus on issues facing the deaf.

“I was in a program that was second to Gallaudet (University) in the country,” minoring in deaf education, said the New Jersey native who earned a Bachelor of Arts in Psychology and a Master of Science in Educational Administration from McDaniel College in Westminster, Md. “I actually took three years of deaf culture and sign language classes.”

His interest in enriching the lives and prospects of underrepresented groups continues to fuel his long-term interest in pursuing a doctorate. Currently he is studying global leadership specializing in academic administration at Indiana Institute of Technology in Fort Wayne. He finds his research dovetails nicely with his new responsibilities.

“In this world of globalization it’s important that we promote cultural as well as global competence in preparing graduates to live and work in a changing and complex world,” Felton said.

“It was a long first day, but it was truly rewarding to be able to see and meet not only the faculty and staff in attendance but so many of our students who have amazing stories and have overcome some great odds to be able to pursue their education,” Felton said. “It just solidified for me that Cortland is a great place to be, and we get to work with some amazing and promising students.”