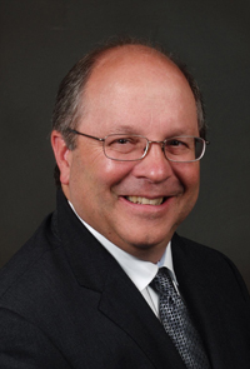 
William “Bill” G. Richards ’88, a leading researcher of new therapeutics for diabetes, cardiovascular disease, kidney disease and other illnesses, has been named the 12th inductee into the SUNY Cortland Academic Hall of Fame.

Richards also conducted the SUNY Cortland Academic Hall of Fame Inductee Seminar, titled “From Dense Bones to the Clinic: The Power of Genetics in Drug Discovery,” that day in Sperry Center’s Johnson Lecture Hall, Room 106. The talk was free and open to the public.

Richards was promoted to his current role with Amgen this year. He had served since 2005 as a director of discovery research in the metabolic disorders department. His nephrology research at Amgen, located in Thousand Oaks, Calif., allowed him to establish a worldwide network of academic partnerships aimed at developing more effective treatments for individuals with kidney disease.

Richards joined Amgen in 1996 as a scientist in the Neurosciences Department. He established a mouse genetics and gene-mapping core and led an effort to identify therapeutic targets for Huntington’s disease.

As the company’s interest in treating renal illnesses grew, Richards was asked to lead an effort to identify ways to treat polycystic kidney disease. During this time, he also headed several academic and industry partnerships.

Richards currently oversees the Metabolic Target and Drug Discovery Group. The group has 30 members, including 10 Ph.D.-level scientists, and focuses on the discovery of new therapeutics in several areas. In the renal area, his group works primarily on diabetic nephropathy and provides pre-clinical support for Cinacalcet, a drug for advanced-stage dialysis patients. Richards has been involved in reviewing licensing opportunities and acting as the research liaison between scientists and Amgen’s clinical development and marketing nephrology groups.

From 1993 until he joined Amgen, Richards conducted post-doctoral research as a Eugene P. Wigner Distinguished Fellow at the Oak Ridge National Laboratory in Oak Ridge, Tenn. There, he worked on the characterization of a novel mouse model of polycystic kidney disease, which was generated as part of a large-scale mutagenesis effort.

A native of Cazenovia, N.Y., Richards graduated from Cazenovia High School. He is married to Emily Rinehart Richards ’88. They have two children, Maegan, 18, a student at Princeton University, and Conor, 16, a high school student.