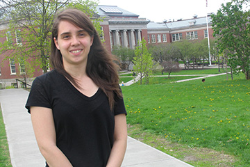 
In the summer of 2016, Gabrielle Laruccia fell in love when she studied abroad in Fulda, Germany. She did not fall in love with a person, however, but with the language, the culture and the people.

Laruccia, a senior international studies major from Brooklyn, N.Y., has since received a prestigious Fulbright English Teaching Assistantship (ETA) in Germany for the 2017-18 academic year.

“Being in a different country you learn how different people are, and yet, the same,” said Laruccia of her one-month Germany experience of travel and classes with 40 other students, hosted by SUNY Cortland. “I want to learn more about the German culture because the textbook and a professor in a classroom can only teach you so much.”

Laruccia is one of approximately 140 selected recipients for the Fulbright ETAs in Germany, out of roughly 377 original applicants, said Jerome O’Callaghan, associate dean of the College’s School of Arts and Sciences.

“Gabrielle has a knack for telling short, often amusing, stories to illustrate a concept or point,” said O’Callaghan, who shepherds SUNY Cortland’s Fulbright applicants through the process. “Her vocabulary is extensive and she will be very successful in communicating effective English speaking skills to her students.”

Established in 1946 by the U.S. Congress, the Fulbright Program offers international scholarships to foster leadership, learning and empathy between cultures. Named for the late Senator J. William Fulbright, it is sponsored by the U.S. Department of State. The program’s website, us.Fulbrightonline.org, explains that it is the largest U.S. international exchange offering opportunities for students, scholars and professionals to undertake graduate study, advanced research, university teaching and teaching in elementary and secondary schools worldwide.

“There is nothing more exhilarating than learning and talking about other languages and cultures,” said Laruccia. “Fulbright will enable me to establish intercultural connections with students and colleagues, just like the ones I have after Fulda.”

Laruccia is one of only three SUNY Cortland students to receive a Fulbright Award since 2010. The recipients include Peter Rakowsky in 2014, for studies in Ukraine, and Chelsea Dixon in 2010, for an ETA in Spain.

Laruccia began studying Italian at age 14. She is presently in her third semester of German language classes and received good grades in her first two. She earned high marks in a tutoring course at the College and presently is a tutor for the college-level Italian courses and introductory German language courses.

“The German language is beautiful and intricate, like a composition by Amadeus Mozart,” Laruccia said. “No, it does not roll off the tongue like the romantic languages Spanish, Italian and French. No, it is not simple. Like every language, German is an artwork, a science, and a puzzle all at once.”

Aside from her experience of German life in Fulda, Laruccia keeps up with German news via the BBC network and Der Spiegel newspaper, O’Callaghan noted.

“She can speak knowledgeably about the current political concerns surrounding Germany’s refugee policy and also has an understanding of Germany’s educational system structure,” O’Callaghan said. “Gabrielle is interested in the theory that the German desire to create and observe order is part of a search for national unity.”

After her previous time abroad, Laruccia is eager to work with children. She may spend up to 12 hours per week at the school she is assigned.

“I’ll see the culture really actualized in children through their actions, rather than adults who will more or less just tell me and explain to me because I am a foreigner,” Laruccia said.

Although she is nervous about spending nearly a year abroad and the budgeting that it will require, Laruccia’s biggest challenge comes before she even lands in Germany. She must find an apartment.

“That’s going to be daunting,” said Laruccia. “The program will help me with the costs, but it’s up to me to find my own living arrangements. I plan on relying on friends that I made in the program who are currently in Europe, and also speaking with my professors.”

While she’s not entirely sure of her career plans, Laruccia hopes to find a job that allows for travel or that would promote intercultural and international exchanges.

“I feel it’s really important for people to be interacting with people from different countries, from different cultures, different languages,” said Laruccia. “Even in the way a language is structured, they tell you what’s important, what’s highly valued in that society and what constitutes being a person.”