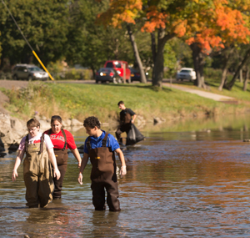 
Members of SUNY Cortland’s Geology Club put on waders and hopped in the Tioughnioga River on Saturday, Sept. 27, for a reason other than scientific exploration.

Eight students from the club, as well as one student’s daughter, participated in the annual Cortland County River Cleanup to remove trash and debris from the water for approximately two hours that morning.

“We use the river a lot for classes,” said one Geology Club member, senior geology major John Wiant of Romulus, N.Y.

“We are trying to leave the river better than it was when we started,” he added.

“When we go out and work in the area we can actually see the difference it's made,” added Shawn Taylor, Geology Club vice president and the leader of Saturday’s club group.

“The event provided a great way to get everyone involved and working together,” said David Barclay, professor and chair of geology and the Geology Club advisor.

Usually the river is a familiar place for the prospective geologists to study hydrology with Assistant Professor Li Jin.

“In this class, we do a semester long study,” Wiant said. “During lab, we collect various types of hydrological data such as current, depth and transects of the river and chemical composition of dissolved solids in the water, from the West and East Branches of the river.”

The community event is held annually by the Cortland County Soil and Water Conservation District. Participants form teams and remove refuse from a particular portion of a stream, pond or lake. They then choose to deposit the trash collected at a designated drop off point or at the Conservation District office.

“We weren’t expecting as many people to be there, so it was very rewarding to see so many people helping out,” said Taylor of Johnson City, N.Y.

“For us as students, being able to keep the area we live in, for months at a time, clean is something to be proud of,”  Taylor said. “At the same time, it's a way to show the permanent Cortland residents that the student body cares about the town as much as they do. Any chance to give back to Cortland — whether it's through a simple cleanup or whatever the case — should be actively pursued.”