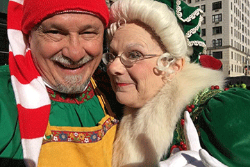 
When it comes to celebrating Thanksgiving traditions, in true Cortland style, William Lee M ’89 goes all in.

Lee, a retired Cortland educator who now lives in Bel Air, Maryland, has escorted a float in every annual Macy’s Thanksgiving Day Parade in New York City since 2012, and this year braved high winds from a major storm to do it again.

One year he poked his head out of a giant, fuzzy stop sign, wearing a costume related to the Hess Truck float he was accompanying. Another time, he gave onlookers a taste of the Old South, escorting a Mississippi River-style showboat-themed float, and yet another, donning an Old West outfit to pose near “Mount Rushmore,” South Dakota’s float. He’s even snuggled up to Mrs. Claus as a cheeky elf.

“To come down along Central Park West, there’s millions of people and it’s just so exciting,” Lee said. “I look forward to it. Everyone looks forward to it. It is the kickoff to the holiday season.”

Started in 1924 and tied with Detroit for the second-oldest Thanksgiving parade in the United States, the Macy’s parade is held in Manhattan from 9 a.m. to noon Eastern Standard Time on Thanksgiving Day. It has been televised nationally on NBC since 1952. Employees at Macy’s department stores have the option of marching in the parade.

Although he has never worked for the U.S. based department store chain Macy’s, Lee has apparently has joined the legion of permanent event helpers.

He grew up watching it on television, back when the event was broadcast in black-and-white.

Around 2000, once his children were old enough, Lee and his wife and two sons stayed with relatives in New Jersey in order to attend the parade, sitting down for dinner with family later.

“That morning, we would bundle up and sit on the sidelines and watch the parade,” Lee said. “I’d say, ‘Gee, I’d love to be in the parade.’ I met some people who were in the parade and they tried to get me in. And they couldn’t get me in.

“I contacted the local Macy’s, talked to the manager, said I was a schoolteacher and would love to be in the parade,” said Lee, who taught in the Cortland City School District and in SUNY Cortland’s Communications and Media Studies Department. “And they couldn’t get me in. I sent a letter to Macy’s chief operating officer, who said, ‘Sorry, we only have people who work here.’

One day, while volunteering as a public speaker at a local rehabilitation center near Syracuse, N.Y., Lee encouraged clients to talk about their dreams.

Dreams are a very big deal for Lee, who in 2008 won $8,000 as a contestant on the television show “Who Wants to be a Millionaire.” From his winnings, he funded  an annual scholarship for a Cortland High School student.

“One of the patients said, ‘Bill, what’s your dream?’ I said, ‘Walking in the Macy’s Parade.”

After his presentation, Lee lunched with a facility custodian. “He told me that was his dream, too, and he said, ‘My daughter works for Macy’s now. I’ll give her a call and maybe the three of us could be in the parade.’

“And that’s what happened,” Lee said.

That first year, and never again, Lee was assigned the coveted role of balloon holder, joining a team of some 48 handlers to manage the 2012 “Diary of a Wimpy Kid” balloon.

“Actually I got to spend most of the parade with the author of The Diary Of A Wimpy Kid, Jeff Kinney, and his wife and his brother-in-law and his sister. But other times I’ve been a float escort.”

In 2014, Lee met a real star of Broadway and film, Idina Menzel, who voiced Queen Elsa in the 2013 Disney hit film “Frozen.”

“When you’re with a float, there’s usually some kind of musical performer,” Lee said. “When you get down to 34th street, the performer will lip synch a song.

“But no one’s as popular as Santa Claus. It’s like Santa’s the rock star.”

In 2017, escorting the Santa’s Workshop float wearing a long red-and-white striped knit hat and other elvish things, he got a closer look at the mysterious kindly couple.

“Mrs. Claus and Santa Claus, they’re like professionals, and I’ve played Santa Claus before,” he said.

The next year, NBC’s coverage captured Lee with arms raised in glee wearing a farmer-type overall outfit beside the Homewood Suites by Hilton’s giant duck float.

The year after that, Lee told everyone he knew that he was going to be on the Lindt chocolate float.

“And they said, ‘Make sure you bring back some candy.’ On parade day, dressed as a chef, Lee was helping some rather Tyrolean looking elves into their costumes when a woman with whom he struck up a conversation told him she was a company vice president.

“I told her what my friends asked, and she said, ‘I should have brought some. Give me an address, and I’ll send you some.’

“She sent me $100 worth of chocolate. I had to give most of it away of course, to friends, kids at school, teachers. I would have felt guilty if I didn’t. It was really nice of her to send it.”

Lee has become a Macy’s Thanksgiving Day Parade pro as a result of his seven years of volunteer service plus a “Float Camp” training session one October at Macy’s gigantic parade warehouse in New Jersey.

“It was a chance to walk around and look at all the different floats where they were stored,” he said. “So I took a selfie with Mount Rushmore. When I found out what I’d be on that year (2016), it was Mount Rushmore.”

Last year was one of the coldest years in the history of the Macy’s parade, and the talent (crew) canceled out.

“It was supposed to be a showboat and we were to wear straw hats and have a sort of barbershop quartet type look,” Lee said. “But it was so cold out we were given a warm hat and scarf.

Regarding each year's costumes, Lee said, “You don’t really know until you get there.”

Like the character in the book, Where’s Waldo?, Lee popped up and mugged for the television cameras alongside this year’s Wisconsin Dells Kalahari Resorts and Conventions float wearing a type of Steve Irwin “Crocodile Hunter” getup. Popular 90’s girl group TLC also performed on the 2019 float, singing hits like “No Scrubs” and “Waterfalls.”

“They were sweet and generous with their time and well-received by the crowds,” he said of TLC. “Two or three of the college and high school bands serenaded the ladies with a version of ‘Waterfall’ as they passed us to enter the parade. Just a wonderful day, or as the commemorative pin given to participants read, ‘Best Thursday Ever – 2019.’”

His sons Nathan and Jacob now live in New York, so it will still be possible for them to watch their eternally young father skip and gambol past them on parade day next year.

“I think once you’re in, you are kind of grandfathered or grand-mothered in,” Lee said, with excitement in his voice.

“They just keep asking you to come back. There’s always time for Thanksgiving. It’s Thanksgiving every day. By virtue of sharing my dream with others, that’s how my dream came true.”

CAPTION: As shown in the above left image, meeting Mrs. Claus was been a highlight of Lee's Macy’s parade career.