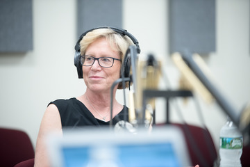 
Candy Altman-Bergantino ’77 recalls walking into the campus radio studio on her second day at SUNY Cortland.

It was a decision that shaped the rest of her life.

Altman-Bergantino recently retired after a 40-year career in television journalism that spanned roles as an award-winning producer to the vice president of news at Hearst Television, where she shaped political coverage for its 34 affiliate stations around the country.

Altman-Bergantino, one of the original founders of WSUC, returned to the College this week as an Executive-in-Residence to share her expertise in journalism with Communication and Media Studies students.

During a visit to Professor Caroline Kaltefleiter’s New Communication Media class, the alumna gave a presentation on ethical decision-making in journalism and media literacy. She shared stories from her career, including how Hearst Television covered the Boston Marathon bombing in 2013 and tried to protect its viewers from a deluge of incorrect information that was flooding social media.

She implored today’s students to strive for truth and accuracy in their work, whether they find careers in journalism, public relations, advertising or any other field.

“Speculation is your enemy when you’re talking about breaking news and honestly, when you’re talking about pretty much anything,” Altman-Bergantino said. “If you’re having a discussion in whatever part of the profession you choose to go into and you’re trying to decide how to make a decision, speculating on someone’s motives or what someone was thinking will always lead you down a bad path. Always deal in facts and be the person in the room who says, ‘What do we know to be true?’”

During her time on campus, Altman-Bergantino visited a variety of classes, including Reporting the World, Political Communication, Trends in Popular Culture and Introduction to Media Writing. She also met with faculty from the Communication and Media Studies Department and talked to student reporters from WSUC-FM, campus television station CSTV-20 and The Dragon Chronicle student newspaper.

Altman-Bergantino saw firsthand the transition of the campus radio station from an AM station (WCSU) to an FM station (WSUC) that has become an important part of the Cortland County community. She served as WSUC-FM’s first news director. After graduation, she went on to earn a master’s in journalism from the University of Missouri in 1978.

She was a producer and news director at WCVB-TV in Boston, Mass. before becoming vice president for news for Hearst in 2001. Altman-Bergantino was the recipient of a Peabody Award for the network’s coverage of the 2008 elections and won nine consecutive USC Annenberg Walter Cronkite Awards.

Altman-Bergantino encouraged students to make use of all the opportunities they have at SUNY Cortland. Her passion for news, combined with the hands-on experience she received at the campus radio station, helped propel her into a successful and rewarding career.

“My one piece of advice would be to take advantage of all of that,” she said. “Take advantage of the fact that your class sizes are relatively small. You have professors who really know what they’re talking about and really care about what happens to you.”