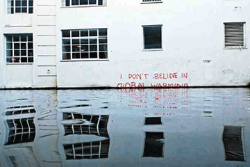 It’s not that members want them to agonize more over student loans. They want students to look at the concept of debt to explore a wide range of issues spanning criminal justice, inequality, immigration and climate change.

“As we become increasingly reliant on debt to finance everything from our education to daily household activity, questions about its efficacy and links to both financial and environmental crisis must be interrogated,” said CICC series coordinator Benjamin Wilson, an assistant professor of economics.

According to Wilson, the inquiry about debt needs to come from not only the traditional economic and finance perspectives but also from an interdisciplinary collection of voices committed to telling a more complex story and starting a new discussion.

To that end, SUNY Cortland will embark on a yearlong conversation through the CICC’s 2019-20 series “Debt.” The program will feature 13 events, including lectures, panel discussions, exhibitions and films.

The presentations will focus on criminal justice and paying one’s debt to society, the climate crisis and reconciling humanity’s carbon debt, compensation for unpaid work such as child care and many other relevant topics.

Programming for this academic year’s series is receiving additional support in the form of a $5,000 grant from SUNY Conversations in the Disciplines, a program created to build connections between SUNY faculty and visiting faulty from non-SUNY institutions. The funding will allow CICC to bring in more speakers from outside the area and publish material collected around this theme.

Featured Conversations in the Disciplines guests as well as Cortland faculty, staff and students are invited to contribute original works, Wilson said. The committee plans to publish the collected works under the Global Institute for Sustainable Prosperity’s ongoing book series under an agreement with publisher Palgrave-MacMillan. The institute is an independent public policy think-tank dedicated to the promotion of interdisciplinary research.

“Debt being such an important topic — that’s being looked at from the viewpoint of history, sociology, economics and climate — what we’d like to have come out of the visiting speakers and faculty members that are exploring these topics is submissions of chapters that would be part of the edited volume,” Wilson said.

Among the many presenters, the series keynote speaker on Feb. 20 is Stephanie Kelton, a professor of public policy and economics at Stony Brook University who served as chief economist on the U.S. Senate Budget Committee in 2015 and as a senior economic advisor to Bernie Sanders’ 2016 presidential campaign.

By holding an annual series on a different intellectual theme, the CICC aims to generate common topics of discussion on campus. The committee encourages faculty and staff to work the theme into their courses, engage in classroom discussions around the theme and propose campus events or speakers on topics connected to the theme.

Each year, the CICC recommends a “common read” to create a foundation for discussion across campus. This year, it will be a piece by author Margaret Atwood, who describes debt as a mental construct and that how we think about debt changes how it works. Inspired by her expansive view of debt, the committee chose the author’s 2008 contribution to the Massey Lectures, Payback: Debt and the Shadow Side of Wealth, as this year’s common read. In it, Atwood — perhaps best known for novels such as The Handmaid’s Tale, describes debt from its ancient origins to its contemporary form as a central metaphor in religion, literature and as a structural force in modern human societies.

“This interdisciplinary examination of debt moves us beyond the narrow constraints of finance and money management to think about debt as a human construct that can be utilized to manufacture crisis or cultivate care,” Wilson said.

TUESDAY, SEPT. 24. Christopher Wildeman, who directs Cornell University’s archive of child abuse and neglect, will lecture on the discriminatory impact of mass incarceration in the U.S. on family health and well-being. He will contrast it with Denmark’s approach to criminal justice that emphasizes rehabilitation. The talk takes place from 5 to 6:30 p.m. in Sperry Center, Room 104.

FRIDAY, SEPT. 27. Juan Gallego, professor at Universidad Rey Juan Carlos in Madrid, Spain, will discuss his work on immigration as well as his next graphic novel, The Plague, from 9:30 to 10:30 a.m. in Dowd Fine Arts Center’s Dowd Gallery.

TUESDAY, OCT. 29. Silvia Fedirici, professor emerita and Teaching Fellow at Hofstra University, will lecture on the devaluation of care through student loan debt and its relation to gender inequality. The presentation runs from 5 to 6:30 p.m. in Sperry Center, Room 104.

The Spring 2020 series events will be announced in a future Bulletin.

In addition to the SUNY grant, the series is co-sponsored by the Provost and Vice President for Academic Affairs Office, the Campus Artist and Lecture Series, the Research and Sponsored Programs Office, the President’s Office and the Cortland College Foundation.

To submit an event, a Field Guide contribution, volunteer to support this year’s activities and programming, or for more information, contact Wilson at 607-753-2436. Stay current with the series news on Twitter at @SUNYCortCICC.