Calm in the Midst of Terror 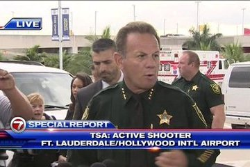 
In the immediate aftermath of January’s mass shooting at Fort Lauderdale-Hollywood International Airport, news sites around the world featured the calm and confident words of a leader whose widely respected law enforcement career was launched from SUNY Cortland.

Scott Israel ’77, the sheriff of Broward County, Fla., oversaw the law enforcement reaction to the Jan. 6 shooting at the airport that left five people dead, injured 40 others, stranded thousands of terrified travelers and shut down one of the nation’s busiest airports. With more than 30 years of police experience, Israel’s measured response to the tragic event – the suspect surrendered without Israel’s deputies firing a shot – kept the public informed and bystanders safe.

Israel helped coordinate a chaotic scene as multiple agencies responded, traffic tangled and people around the globe waited for answers.

“Beyond the tragedy and the loss of five lives and the devastation to the county and to the families, there were some amazing things that came out of that,” Israel said. “First and foremost, I’ve never seen so many first responders from the FBI, the Florida Department of Law Enforcement, from our agency, and so many people were so cohesive and worked together. There were no egos. There was a seamless transition of incident command when it was necessary and I was so proud to be part of law enforcement.”

Good leaders develop over time. Israel said he first started to learn about leadership as a quarterback fighting for playing time on SUNY Cortland’s football field.

“The four years I spent in Cortland were amazing years,” said Israel, a political science major from Long Island. “I got to play a little football and I started one year on JV and played a few games. I was a member of the varsity football team when Roger Robinson was the coach there. I didn’t play a whole heck of a lot. I was a quarterback and it was a very talent-packed position. But it was my first time ever away from home. You learn a lot of things about being self-reliant.”

Israel joined the Fort Lauderdale police department in 1979. He rose to the rank of captain and also served as SWAT team commander. Israel was hired as North Bay Village (Fla.) chief of police in 2004. He unsuccessfully ran for Broward County sheriff in 2008 but ran again in 2012 and won office.

Those public votes of confidence put him in charge of a $700 million agency that employs 6,000 people – roughly equal to the entire undergraduate population of SUNY Cortland. Israel’s agency operates the 12th largest local jail system in the nation and provides law enforcement for seven cities and an international airport.

Israel’s leadership appears to have made a difference. The crime rate in Broward County was at an historic low two years into Israel’s first term. By 2016, violent crime rates had dropped 18.4 percent and burglaries were down 42.3 percent.

Israel, a Democrat, won reelection with 72 percent of the vote in November, aided by an endorsement from basketball Hall of Famer Shaquille O’Neal, who has been active in law enforcement projects following his playing career.

Israel’s success in law enforcement is thanks in part to his progressive methods. He created a squad called VIPER (Violence Intervention Proactive Enforcement) that focused on a small subset of criminals who are empirically more likely to commit violent crimes. Israel has also worked with juvenile offenders to offer counseling and support before arresting them for misdemeanor offenses. The recidivism rate for those youths is five percent, which Israel considers a major accomplishment.

“A lot of people need to be in jail but a lot of people don’t, especially with kids,” he said. “The one thing I’m most proud about and what I hope is my legacy in the county is that we’ve kept kids out of jail like never before through a civil citation program.”

Broward County deputies are starting to wear body cameras after Israel pushed for greater transparency in the department. He is also a proponent of stricter gun control laws, which he hopes will make Broward County safer.

Involved in coaching football at the youth and high school levels, he was named the Brian Piccolo Coach of the Year in 2008 for his decades of coaching service.

Whether it’s on the football field or responding to a crisis, Israel knows that leadership matters.

“Anybody can win the election for the sheriff of Broward County or any county, but to be successful you have to work hard at leadership,” Israel said. “There is no such thing as a born leader. You have to study leadership.”