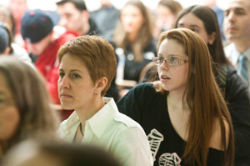 
SUNY Cortland will spotlight student academics on Wednesday, April 18, when it replaces the 15-year tradition of Scholars’ Day with the first Transformations: A Student Research and Creativity Conference. Wells College President Lisa Marsh Ryerson M ’91, the longest-serving college president in Central New York, will give the inaugural keynote address of the re-imagined event.

Last year, a special planning committee re-named and reorganized the event to reflect the need for a fresh start and to more clearly support the College’s strategic priorities, which include “transformational education” and “academic excellence.”

Among many other changes, the renamed 16th annual event removes faculty and staff scholarship from the program, unless the research represents faculty mentors and their students working together on a project. In fact, such partnerships between professors and students majoring in their discipline are a fairly common practice at the College so a strong faculty presence is certain. Some other “firsts” this year include:

• Regular classes across campus will continue during the conference.

• The event will move from Old Main to Sperry Center and Moffett Center.

This year, the conference encompasses 70 different lectures, demonstrations and poster sessions offered by undergraduate and graduate students with their faculty mentors. The subject matter covers a wide array of academic disciplines at SUNY Cortland.

The event is free and open to the public. Area high school juniors and seniors and their instructors again were formally invited to attend this year’s event. Complimentary refreshments will be served from 6:30 to 7 p.m. in the Sperry Center second-floor food service area.

“We are very excited about continuing the tradition of our annual student research conference under the new name Transformations,” said Bruce Mattingly, dean of arts and sciences and Transformations Committee chair. “There are multiple reasons why this name was selected. First of all, it is through the process of research and creative activity that we make discoveries that produce new knowledge and understandings that transform our disciplines. Secondly, the world around us can be transformed through meaningful applications of this new knowledge. Finally, we know that we can transform students’ lives by providing them with opportunities to participate in original research projects.”

Among the many topics this year are: understanding perceptions of crime in the Cortland community: a community-based research project with the City of Cortland Police Department; Occupy Wall Street: a civil disobedience conundrum; a Town of Ithaca recreation needs assessment; fungi and fungal-like organisms in Central New York; transforming eighth graders’ perceptions of college; using geographic information systems (GIS) to update the New York State Department of Environmental Conservation Herpetology Atlas; salary compression in New York state; wind power: an alternative side to the hydrofracking debate; effects of caffeine consumption on sprint performance in college-age men and women; and the challenges and benefits of interning abroad.

Ryerson will deliver the keynote address on “The Change Imperative in Higher Education” at 7 p.m. in Sperry Center, Room 105.

“As higher education seeks to remain relevant, useful, competitive, engaging and appealing to each generation of students and to address each new generation of emerging — or persistent — social issues, we must continue to evolve and to change,” she said. “Likewise, we must teach our students the skills to become agents of change and foster their capacities to fully embrace the changing world they face and the lives of change they will live.”

Ryerson is an experienced, innovative leader known for her advocacy of gender equity, the liberal arts and commitment to providing increased access to higher education.

A Jamestown, N.Y., native, she earned a bachelor’s degree from Wells College and a Master of Science in Education from SUNY Cortland.

As president since 1995 of Wells College in Aurora, N.Y., Ryerson is the first Wells College alumna to become president of her alma mater. She is the institution’s 17th president.

Nationally recognized for her progressive views on higher education and community partnerships, Ryerson speaks and writes about the benefits of inclusive coeducation, gender equality in education and society, women in leadership, and business-education partnerships, among many other topics.

Ryerson led the board of trustees through a planning and decision-making process that included opening the college’s doors to matriculated male students for the first time in the college’s history, beginning in Fall 2005.

In 2010, Ryerson announced the addition of an innovative business center to Wells’ liberal arts offerings.

Ryerson played a key leadership role in economically revitalizing the village of Aurora through the restoration of the college’s extensive holdings in the village’s commercial district. Additionally, she oversaw the construction of Stratton Hall, the college’s state-of-the-art science facility, and the refurbishment of many campus buildings. Under her leadership, Wells completed the largest and most successful fundraising effort in its history, a comprehensive campaign that surpassed its ambitious, $50 million goal.

During her presidency, Ryerson has chaired the Commission on Independent Colleges and Universities of New York State, the Executive Board of the Public Leadership Education Network and the Women’s College Coalition in Washington, D.C. She was commissioner and executive committee member of the Middle States Commission on Higher Education; a member of the American Council on Education’s Commission on Leadership and Institutional Effectiveness; and a board member on the Committee of Accountability for the National Association of Independent Colleges and Universities.

In 2010, Ryerson received an honorary degree of Doctor of Humane Letters from the State University of New York during the SUNY Cortland Undergraduate Commencement.

She has been honored with the Council for Advancement and Support of Education District II Chief Executive Leadership Award; a New York State Senate Woman of Distinction Award; the Girls Inc. of CNY Spirit of American Women National Role Model for Girls Award; the Central New York Chapter of The Public Relations Society of America Communications Advocate Award; a Post-Standard Achievement Award; and a Seven Lakes Girl Scout Council Woman of Distinction Award.

Ryerson resides in Aurora with her husband George E. Farenthold; they have four daughters.

Transformations is supported by the President’s Office, the Provost and Vice President for Academic Affairs Office, The Cortland Fund, the Cortland College Foundation and the Auxiliary Services Corporation. The Student Alumni Association provides volunteers for Transformations.

For more information, including the complete schedule of events, visit the Transformations Web page at www2.cortland.edu/transformations/ or contact Mattingly at (607) 753-4312.