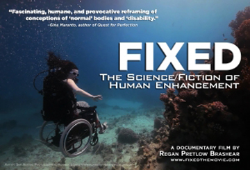 
A 1997 car accident began Regan Brashear’s ongoing journey with fibromyalgia and chronic pain, causing her at age 25 to become focused on the meanings of disability and normalcy.

Brashear had earned a bachelor’s degree in American studies from the University of California, Santa Cruz then, switching directions in life, earned a master's degree in social documentation from there as well.

She will discuss the 2013 film she directed and produced, “Fixed: The Science/Fiction of Human Enhancement,” Tuesday, March 31, at SUNY Cortland.

The screening of her 60-minute film, followed by a question-and-answer period, will begin at 4:30 p.m. in Sperry Center, Room 205.

The program continues the College’s 2014-15 Cultural and Intellectual Climate Committee (CICC) series, themed this year on “R/Evolution.” The presentations question the notion that evolution represents positive change and underscore how timeless issues seem to reassert themselves in the present.

The documentary and talk aim to rethink what constitutes a disability and what society considers to be “normal” by looking at the technologies that have the capacity to change human bodies and minds forever.

“This topic seemed like a rich world to dive into, wrestle with,” she said. “The idea stuck with me so much so that when I went back to school for film I started ‘Fixed’ as my thesis. It’s hard to put film into words but I wanted to challenge this idea of ‘able-ism’ and to look closely at the values we take for granted, as well as try to understand the enhancement technology that’s out there.”

At Open Eye Pictures, she served as a producer and community engagement coordinator for two films: “Under Our Skin,” an award-winning film about the often-chronic condition Lyme disease, and “The Grove.” She also was co-producer for the latter film, about the National AIDS Memorial Grove.

For more information on Brashear’s talk, contact Jeremy Zhe-Heimerman, coordinator of assistive technology and test administrative services, at 607-753-2358. For information on the “R/Evolution” series, contact the co-chair, Associate Professor of History Scott Moranda at 607-753-2052.