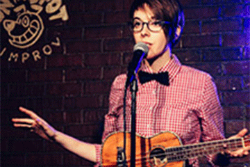 
If by the middle of your week you feel like you could really use a good laugh, take a hump day break from the books to experience a free show by comedian DeAnne Smith on Wednesday, Sept. 19.

Smith, who will be featured in a standup comedy special on Netflix in January, will take the stage at 8:30 p.m. in Old Main, Brown Auditorium. The event is free and open only to SUNY Cortland students, staff and faculty.

Smith, a Canadian writer-turned-comic who describes her boyish look as “nerdy Justin Bieber,” has performed all over the world, including the Edinburgh Fringe Festival, the Melbourne International Comedy Festival, the Iceland Comedy Festival and Just for Laughs Montreal and Chicago to name a few. She’s also been on TV in four countries, including “Last Comic Standing” on NBC, “The Late Late Show” on CBS, Canada’s The Comedy Network and CBC, Australia’s Channel 10 and ABC, and UK’s Sky TV.

The Montreal Gazettedescribed Smith as “Fresh, cutting…one of the finest wits in the country.” The UK’s Telegraphcalls her “Smart. Very funny. Effortless charm lets her get away with murder.” She has not, however, ever actually murdered anyone, according to her website.