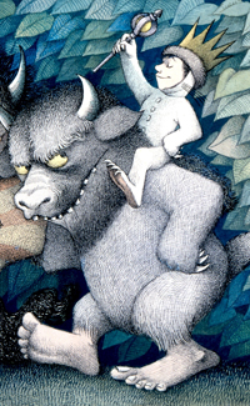 
A national traveling exhibit that explores the influence of Jewish culture in the work of renowned illustrator Maurice Sendak, creator of the children’s classic Where the Wild Things Are, will arrive at SUNY Cortland’s Memorial Library on Wednesday, Aug. 31.

“In a Nutshell: The Worlds of Maurice Sendak,” will be displayed on the library’s second floor through Friday, Oct. 14. The exhibit features eight large color reproductions of works by Sendak, who was born in Brooklyn in 1928 to Polish immigrants and became the illustrator of more than 100 picture books, including Where the Wild Things Are and In the Night Kitchen.

The exhibit and related programs are free and open to the public.

Nicola Morris, a SUNY Cortland lecturer in English and Jewish studies scholar, will give a presentation relating to “In a Nutshell” at the exhibition’s formal opening reception at 7 p.m. on Wednesday, Sept. 7, nearby the exhibit.

The Memorial Library also will sponsor a second lecture by Morris relating to Maurice Sendak at 7 p.m. on Wednesday, Sept. 21, nearby the exhibit; and other programs relating to the exhibit.

“In a Nutshell” shows how Sendak’s artistic journey has led him deeper into his own family’s history and his Jewish identity.

“We are delighted to have been selected as a site for this exhibition,” said Ellen McCabe, senior assistant librarian at Memorial Library. “A study of Sendak’s work proves that his illustrations and stories aren’t just for children. He explores immigration, urban life, nostalgia, the New World versus the Old World, even the legacy of the Holocaust, weaving these seemingly adult themes into his imaginative and playful illustrations. Our library is thrilled to host this exhibition and present a more thorough look at the life of a talented author and illustrator beloved by fans young and old.”

Sendak’s childhood was typically American in a number of ways. At the same time, he became fascinated as a child with the worn black-and-white photographs of his European relatives, and the influence of both of these worlds — the threads of Jewish family, geography, and culture — can be seen in his imaginative works.

Illustrations in his works are populated with friends, family and the sights, sounds and smells of New York in the 1930s. But Sendak was also drawn to photos of ancestors and he developed a fascination with the close-knit communities of European Jews.

“In a Nutshell,” curated by Patrick Rodgers of the Rosenbach Museum & Library in Philadelphia, was organized by the museum and developed by Nextbook, Inc., a nonprofit organization dedicated to supporting Jewish literature, culture and ideas and by the American Library Association (ALA) Public Programs Office.

It is one of three new small-format traveling exhibitions announced recently by the ALA that focus on Jewish artists who have contributed to the culture of the U.S. and the world. The national tour of the exhibit was made possible by grants from the Charles H. Revson Foundation, the Righteous Persons Foundation, the David Berg Foundation and an anonymous donor, with additional support from Tablet Magazine: A New Read on Jewish Life.