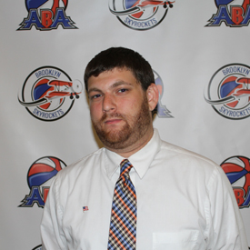 
Few 23-year-olds can boast the same job title as billionaire sports moguls Mark Cuban and Jerry Jones. But while his bank account balance may have far fewer zeroes in it than the power owners of Dallas’ professional basketball and football teams, SUNY Cortland graduate Dylan Gioia ’13 can say he’s in a similar line of work — only on a slightly smaller scale.

The former sport management and business economics major, the subject of a New York Daily News feature this summer, purchased his own American Basketball Association (ABA) franchise in 2013, just six months after he graduated from the College. It’s been a whirlwind year for Gioia, a Brooklyn native balancing a full-time human services job with his duties as a rookie sports owner.

“We’re not the Knicks, we’re not the Nets, we’re not a big-time Division I school,” said Gioia, who will lay out a one-time $10,000 membership fee in the form of a $2,500 deposit and monthly installments of $250 to keep the franchise afloat. “But we’re also not the local neighborhood kids.”

His Brooklyn SkyRockets are slated to take the court for their first game in November. As a do-it-yourself leader in charge of everything from sponsorships to press releases to game operations, Gioia won’t be watching from a lavish luxury suite. That’s because there are no luxury suites at Aviator Center at Floyd Bennett Field, the former naval air station where the SkyRockets will play their games.

Instead, he’ll do what he’s done since his earliest undergraduate days at SUNY Cortland: get his hands dirty doing the work needed to inch his dream along.

“Many students who go through Cortland’s sport management program want to be an agent or a general manager or something similar,” Gioia said. “I was one of those kids, but you learn real quick that being GM for the Knicks is pretty slim in all likelihood.”

Gioia worked strategically during college. He served as a resident assistant nearly every semester, developed a strong relationship with Career Services through his participation in the Disney College Program and joined the Sport Management Club, organizing a European-style handball tournament during his senior year. He even took part in the College’s wheelchair sports programs — a popular evening activity for students studying adapted physical education — just for fun.

“I feel like my reach was a little further,” he said. “I had a little more business-specific knowledge in addition to the law and marketing and media classes of the sport management major.”

Gioia doesn’t carry student loan debt, and after graduation landed a day job at the Iroquois Job Corps in downtown Brooklyn, a vocational job training center that helps people find work and grow acclimated to city life. That 8 a.m. to 5 p.m. commitment means he must be creative with his schedule.

“I’m up ready to take calls and send emails while I’m in the car,” said Gioia, who gets a ride to work from his girlfriend. “Then throughout the day, I try not to do SkyRockets related stuff unless it’s my lunch.

“That means I have to do as much as I can to make up for it on Saturdays and Sundays.”

He knew before setting off on the ABA venture that he would need to enlist the services of friends and family members. His cousin, who works as a lawyer, looked over plenty of the paperwork.

“Then my girlfriend’s sister’s fiance’s friend helped with the website,” he said. “I’ve also heard from complete strangers, which is cool.

“Because honestly, how many opportunities do you have to be involved with something like this?”

Then there are the notes from SUNY Cortland friends and alumni he’s never met wishing him the best from across the country.

“Usually they say stuff like, ‘This is amazing. You’re giving us a great name. I wish you all the best,’” Gioia said. “And that stuff means a lot to me.”

Still, he knows the franchise won’t get by solely on praise and well wishes from others. A majority of the team’s success will depend on sponsorships and ticket sales — two areas Gioia realizes that he needs to grow. Currently, more than 90 ABA teams compete across the country. On average, 10 of them fold each season.

“A lot of it will come down to the time I can put into it,” he said.

The SkyRockets’ roster — holdovers from an old ABA squad in Brooklyn that disbanded as well as some talent discovered during three open try-outs ? doesn’t include any household names. He hopes to pay his players $50 per game to start.

In addition to the modest payment, they’ll be part of a league that has graduated players to higher European leagues and a handful of NBA front office jobs. On occasion, they’ll have the opportunity to be viewed by a potentially international audience, thanks to a two-year agreement between the league and ESPN. The SkyRockets’ home opener on Saturday, Nov. 15, for instance, is slated to be broadcast as the ABA’s Game of the Week on ESPN3 and the WatchESPN app.

Further, SkyRockets players will lace up their sneakers knowing that they play for an energetic owner who, although less than two years removed from college, realizes what it means to take a risk and who surely isn’t afraid of failure.

“I tell myself sometimes that there are some people who ask, ‘Why?’ and others who ask, ‘Why not?’” Gioia said. “I guess this makes me a ‘Why not?’ person.