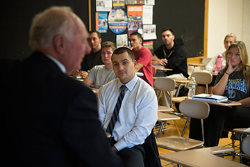 
It’s not often that a classroom full of future entrepreneurs gets the chance to hear all about the financial industry from a sharp-dressed, major figure of Wall Street.

His rapid-fire advice to them included the following:

“Come up with something and if it works, you’ll make something.

“Watch yourself. You don’t want to mess with the IRS.

“You say, ‘I don’t have any money.’ You do. There are ways to make money, you just have to be flexible.

Bocklet, the former New York Stock Exchange (NYSE) vice chairman overseeing the most respected securities market in the world as its third highest official, met these mainly junior and senior business economics majors when he visited SUNY Cortland Oct. 21 and 22 as an executive in residence.

After he graduated, Bocklet left a comparably comfortable job as assistant director of recreation in Rockville Center, N.Y., in search of money to support his quickly growing family.

At first he found a trading opportunity as a “two dollar” broker — doing excess business for major corporations — almost by chance. He proved energetic and resourceful and sought greater income as his family increased, eventually to three sons and three daughters.

Bocklet moved to the NYSE in 1963 and, four years later, became a NYSE specialist and partner with Einhorn & Co. From 1973 to 1986, he worked as a stock exchange specialist on the NYSE for Beauchamp & Co. In his 40 years of involvement with the NYSE, Bocklet rose through its hierarchy as a floor official, governor, senior floor official, one of its four directors, and lastly as the vice chairman.

He chaired the NYSE’s Rules Review and Flip Trading Committees, and served on its Nomination and New Member Committees and its Hearing Panel. He is a former director of the Securities Industry Association.

As he rose on Wall Street, Bocklet also invested in real estate. He would borrow money to buy and improve family vacation properties on the beach, in rural upstate and in Florida. The transactions not only have profited him in the long run but helped him transition from securities to investment in commercial real estate products and ventures in more recent years.

“Don’t be afraid to mortgage. It puts money back in to make money,” he suggested.

He sold Bocklet & Co. abruptly in 2001, within weeks after that year’s Sept. 11 terrorist attacks.

Bocklet exited Wall Street because he saw the era of human floor traders was coming to an end and he was worried for the safety of his employees, which included his sons and sons-in-law.

He was honored by the State University of New York with a Doctor of Humane Letters during SUNY Cortland’s 2002 Commencement.

“I didn’t rent limos. I flew regular class,” and drove his family around in 10-year-old cars, he said.

“If you’re in a business, you run the business,” he said, recalling his more recent personal experience financing a deluxe dog boarding and grooming center in a converted warehouse for his son and learning how badly things can go when owners aren’t on top of things.

The class also heard his very original take on what’s going on in the industry:

“Janet Yellen should do the talking. The market will adjust,” he replied to a question about whether the current Federal Reserve System board of governors chair should continue her predecessors’ trend of taking a pass on raising the historically low prime interest rate after letting everyone else weigh in on the subject.

While on campus Bocklet also met with many members of the campus community and dined with students from the College’s Federal Reserve group.

“Your family is what it’s all about,” Bocklet offered as his chief takeaway for the students.