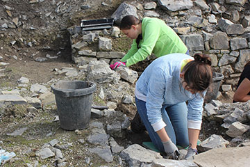 
When SUNY Cortland students return to campus after summer break, some travel a lot farther than others.

Medieval, 13th-century Ireland to be exact.

Naczi, a Marcellus, N.Y., native, was one of two SUNY Cortland students who spent four weeks working and learning amid the archeological ruins of a Catholic friary in Trim, Ireland. The course, taught by archaeologist Scott Stull, a SUNY Cortland adjunct professor of sociology and anthropology, was offered in conjunction with the Irish Archeological Field School.

It was one of many summer programs that allowed SUNY Cortland students to experience similar educational adventures in India, Greece, Turkey, Australia, Costa Rica, Belize, Germany and other countries.

“There’s’ something really amazing about getting in there and finding something that’s hundreds of years old,” said Naczi, who learned how to pull meaning from the time-worn rubble of Ireland’s Black Friary. “Like, ‘Wow, this is something that was lost to history and now it’s found.’”

The friars who painstakingly transcribed religious texts in the 13th century religious community likely would have appreciated the attention to detail practiced by Naczi, Stull and Caroline Sampson, a SUNY Cortland archeology major from Delmar, N.Y.

From June 4 to July 2, Stull’s group engaged in excavation and archeological field work training in the rural County Meath community situated on the River Boyne. They applied both traditional and cutting-edge technology to make educated guesses about how members of the ancient religious order lived their lives.

“This field school is where you go from whatever theoretical knowledge you have of archaeology and put it into practical use,” Stull noted. “You get the experience that you can’t get sitting in a classroom or even in a laboratory. This is the ‘learning how to be an archeologist’ class on an archeological site.”

Trim is perhaps best well known for medieval structures that are still standing, including Trim Castle, the largest Cambro-Norman castle in Ireland, and its St. Patrick’s Cathedral.

Naczi and Sampson can now boast they’ve worked on an original, professional archeological dig. Quarried as a source of building material for hundreds of years after it ceased as a monastery, the Black Friary site retains only subtle clues for researchers to ponder.

“I didn’t find pieces of pottery or coins, but I excavated an area where there was possible metaling, which means there could possibly have been a floor and door area there,” Naczi said. “‘Metaling’ is just a fancy word for a ‘place of compacted small stones.’”

Stull’s specialty is “access analysis.” He has studied how people with different social standing were allowed access in and around medieval German castles as well as President Lincoln’s Cottage and other early American historic buildings. He has a Certificate in Museum Studies from Harvard University.

At Trim, medieval structures haven’t been erased by development compared to their counterparts in places like Great Britain. So the placement of churches, monasteries, castles and other medieval structures and their proximity to one another is more easily studied.

For his own research, Stull gained insight from comparing the “conquest” process of castle building found in Ireland and Great Britain — which was heavily invaded by the Normans — to the “non-conquest” castles found in Germany.

“I’ve been working on a project on the placement of castles on a landscape,” Stull said. “There is a section of medieval agricultural fields that were associated with the castle and adjacent monastic site that are still there. It’s as it was, except for a couple of roads and some things that have fallen into ruin. The village itself still has the medieval layout and so here I can go and see a castle in a remarkably well-preserved landscape. And I came to understand the process of conquest through castle building: because I had spent enough time there, I could see all of the connections.”

On one day in particular, Stull and Naczi set aside the painstaking digging that typifies an archeologist’s occupation. At the Yellow Steeple, part of another monastic ruin, Naczi monitored a sophisticated digital camera mounted on a wheeled tripod as it created a multitude of exact, 3-D scanned images inside the building. Supplied by Ithaca College, the equipment is designed to capture both the look of the surroundings and its exact location.

Although she appreciated the experience, “I definitely prefer the hands-on digging in the ground,” she said. “The scanning does all the work for you. It goes around and you just kind of sit there and make sure it’s working.”

Stull explained that the building scanning project continues his ongoing partnership with Michael “Bodhi” Rogers, an archeogeophysicist and an Ithaca College associate professor in the Department of Physics and Astronomy. The co-investigators began collaborating about a decade ago when Stull was an anthropologist working for a private company, Hartgen Archeological Associates in Rensselaer, N.Y. Rogers has a doctorate in physics and a master of science in archeology while Stull brings anthropology and social science to the mix.

Besides preservation, the ultimate goal of using the 3-D scanning equipment shared by Rogers is to let historians and enthusiasts take an electronic stroll through historic ruins without leaving their armchair.

Stull, who joined SUNY Cortland’s Sociology/Anthropology Department in 2011, noted the equipment is a step up from a panoramic photo, because the viewer can look at the digital visual model of the site from any angle, without any distortions. The original goal and the primary use for this is as a preservation tool, Stull said. It’s going to be imported into an architectural drawing program from which scholars can then select points and link information to it.

“I liked the fieldwork but I also liked the teaching,” Naczi said. “I think in high school there’s not enough on the fields of archeology or even anthropology. So I feel like kids don’t get exposed to it enough to know what that is.”

Studying in another country has opened her eyes to a new world.

“We don’t really get that exposure of different cultures. So you have all these kids going off to College who are very ethnocentric.”

“There’s a different level of understanding that you get from going to the site, going to another country and actually learning what all these little pieces that we pick up from our classes and from popular culture: what it means to be Irish and be in Ireland and have the experience of being there,” Stull said.

“Sometimes there are things that you learn because you are on a historical site that you wouldn’t think to put together if you are not there,” Stull said.