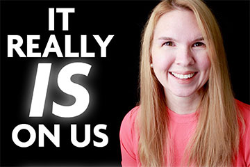 Her talk, which will focus on her research, is free and open to the public. The presentation begins at 7 p.m. in the Corey Union Function Room. A panel discussion will follow.

Luther’s presentation supports the national “It’s On Us” campaign, an awareness program aimed at ending sexual assaults on college campuses.

The campaign, launched by the White House in the fall of 2014, asks men and women across the United States to make a personal commitment to step off the sidelines and be part of the solution to sexual assault on college campuses.

She is the author of a book, Unsportsmanlike Conduct: College Football and the Politics of Rape. Her work has been featured in ESPN Magazine, New York Times Magazine, Sports Illustrated, BuzzFeed and Vice Sports.

Luther has explored the intersection of sports and violence off the field for several years. Her reporting exposed Baylor University’s 2015 decision to allow star defensive player Sam Ukwuachu to join its football team after he was kicked off the Boise State team for a previous incident of violence involving a female student.

Ukwuachu was on trial facing two counts of felony sexual assault against a female Baylor student-athlete at the time. He was eventually convicted on those charges.

During her visit to Cortland, Luther will discuss her findings, specifically looking at the issue of campus sexual violence and its intersection with college athletics.

“I’ll set up the context of this discussion: the extent of the issue, how we normally respond to it, why we need to be better about response,” Luther said. “But then I will get into what we can do to prevent this.” That will mean a short discussion on what Title IX is, how individuals can report, what consent is, how bystander intervention works, the necessity to hold people in powerful positions accountable, and examples of students

Luther graduated from Florida State University in 2002 with a double major in classical civilizations and Greek/Latin and earned her master’s degree in Latin literature at the University of Texas in 2004.

Several years after transferring to the history department at University of Texas, and before she could earn a Ph.D., Luther decided to leave academia and pursue writing full time. She is now a fellow in the Texas Program in Sports and Media at the University of Texas and a member of the Association for Women in Sports Media.

“I am a huge college football fan,” Luther said. “I was born into Florida State football fandom. My parents both went there, it was the only college I applied to. And then it happened that in the 2013 season, one of the biggest college sexual assault cases in a long while broke open and it was the then-quarterback of my alma mater who was accused.”

Unsatisfied with how the news media covered campus sexual assault allegations, Luther began to write about it.

“I did the easiest thing first: media criticism,” Luther said. “That morphed over time into reporting on this and eventually investigative reporting. And I haven't stopped.”

The event is one of many campus activities on similar topics scheduled during national Sexual Assault Awareness Month. Many focus on bystander intervention, which Luther believes is important.

“It’s On Us,” with its name alone and then with the bystander intervention training it does, puts a direct spotlight on members of the community to take an active role in preventing violence,” Luther said. “I like that.”