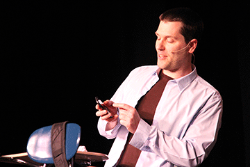 
The nationally recognized actor, writer and solo artist Tim Collins will return to SUNY Cortland on Wednesday, Oct. 3, as the highlight of a weeklong series of events from Oct. 1 to 5 focusing on the serious issues of relationship violence and bystander intervention.

Collins will perform “Mend,” a one-man show that will address those topics as well as gender roles and masculinity, at 7 p.m. in the Corey Union Function Room.

“We’re looking for as many creative ways to reach out to students to get them thinking about these issues, so if they are in a situation to interrupt harm before it happens, they have some practical skills,” said SUNY Cortland’s Title IX coordinator Nan Pasquarello.

Collins’ talk, which is free and open to the campus community, is part of an ongoing series of programs to prevent sexual and intimate partner violence. Collins’ performance is presented by SUNY Cortland’s Title IX office, the It’s On Us Action Team and Auxiliary Services Corporation. The event is part of the College’s Wellness Wednesday series, a continuing initiative to promote lifelong well-being.

Meanwhile, the student club Students Active for Ending Rape (SAFER) worked closely with the campus committee It’s On Us Action Team to develop the rest of the week’s programs.

“Mend” will be a new performance for Collins, who has been a playwright and performer since 2001, and has appeared on ABC News, Spectrum News and NPR.

Collins, who has visited the campus twice before to address sexual assault, strives to relate to students in a unique and creative way so they will learn more about the issue and understand how they can be a part of the solution.

“Tim created the ‘Mend’ program because he recognized that dating violence is a very important issue,” Pasquarello said. “And he’s trying to expand his educational framework to go beyond just talking about bystander intervention around sexual assaults to include bystander intervention around toxic relationships and dating violence. He recognizes these are interrelated problems of intimate partner violence.”

Collins has taken his educational one-man show across the country in a variety of venues.

“Tim is a master at taking on different personas and they are very, very convincing,” Pasquarello said. “He does a lot to promote healthy masculinity and helps people help friends who might be in difficult situations in relationships. He will look at harmful attitudes that are prevalent in society and might be perpetuated in the media and films. He breaks down myths and helps people think critically.”

A recipient of the Wallis Foundation Grant, Collins was a featured performer at the 24th national “Sharing the Fire” National Storytelling Conference and was nominated for a Kevin Kline Award. He was honored as “Best Solo Performance” in the second annual Dialogue ONE Solo Theater Festival in 2012 and, the following year, as “Best Educational Show” in the United Solo Theater Festival. For more information on Collins, visit his website.

One in five women and one in 16 men will be victims of attempted sexual assault during their college careers.

That’s why since 2015, SUNY Cortland has been part of It’s On Us, a national awareness program aimed at ending sexual assaults on college campuses. The “It’s On Us” campaign asks men and women across the United States to make a personal commitment to step off the sidelines and become part of the solution to stop campus sexual assault.

SUNY Cortland’s It’s On Us Action Team is comprised of students, faculty and staff who work to help students understand the notion of sexual violence as well as domestic violence and stalking.

“The campus It’s On Us action team meets bi-weekly,” Pasquarello said. “We’re a clearinghouse composed of many people, because to develop successful prevention programming it has to be done broadly to reach as many as possible.”

In the last decade, the College has ramped up its efforts to prevent sexual assault, interpersonal violence, stalking, dating violence and sexual harassment.

“We have vastly increased our programming to our students,” Pasquarello said. “We’ve engaged many more people because more people have realized the scope of the problem and we want to have all hands on deck.

“I think there’s been greater recognition, on campus and nationwide, of problems that have always been there,” she said.