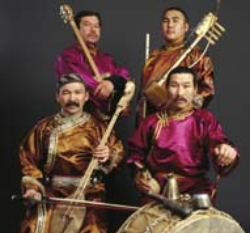 
The musical quartet Huun Huur Tu will bring an innovative genre of music that combines traditional instruments and funky rhythms when it visits SUNY Cortland on Wednesday, Oct. 19.

The group, from Tuva — a Russian republic about the size of Iceland and which borders with Mongolia — relies on vibrant acoustics to produce unique throat-singing sounds. Huun Huur Tu will perform at 8 p.m. in Old Main Brown Auditorium.

The concert, part of the 2011-12 Campus Artist and Lecture Series (CALS), costs $5 for general admission and $3 for SUNY Cortland students who show their College ID. Children 10 years old and younger will be admitted free. Tickets can be purchased in Corey Union, Room 406, or at Brown Auditorium beginning one hour prior to the performance.

“The CALS Committee is charged to serve as a focal point for planning the expansion and enrichment of campus cultural activities,” said Sandra Wohlleber, the assistant director for campus activities and Greek affairs. “We look to rotate things around so we do not appear to always be bringing back the same groups and the same types of events. We look to come up with some possibilities of different genres and different performers to bring to campus.”

A throat singing group has been on the committee’s wish list for four years, she said.

Huun Huur Tu began touring in the West more than 17 years ago and has been credited with introducing the outside world to a wealth of Tuvan traditions.

Throat singing has become the ensemble’s trademark. The group’s singers produce two or three notes simultaneously, giving off the sound of a flute, whistle or bird. But only the human voice creates the sound. Music critics compare Huun Huur Tu’s sound to the whistling of the winds of the Altai Mountains in south central Siberia, near where the group is from.

“It is unfamiliar yet very accessible, an otherworldly but deeply spiritual music rooted in the sounds of nature,” wrote one critic in the Chicago Tribune.

Native Tuvan instruments back up the throat singing while some western instruments, such as the guitar, appear in select songs. The group’s genre is often listed as indigenous folk. But Huun Huur Tu also experiments with electronic music.

The group has been active since 1992 and has released 17 albums, including its most recent recording, “Eternal,” in 2009. Several musicians, including Frank Zappa, have collaborated with the quartet.

For ticket information or questions regarding CALS events, contact the Campus Activities and Corey Union Office at (607) 753-5574. Huun Huur Tu appears by arrangement with Eye for Talent, Inc.