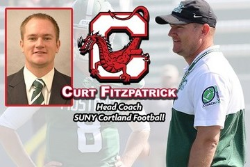 
Curt Fitzpatrick has been chosen as SUNY Cortland's new football head coach in an announcement from director of athletics Mike Urtz. Fitzpatrick replaces Dan MacNeill, who spent 23 years at the Red Dragon helm and retired following the 2019 season.

"It is an honor to become the next head football coach at SUNY Cortland," said Fitzpatrick. "I have been an admirer of Red Dragon football since I was in high school, as a college player, as an assistant coach, and now as a head coach. Coach Mac is an icon in the D3 football landscape. It is surreal that I have the opportunity to build on the foundation of all those Red Dragons that have come before."

Fitzpatrick served as head football coach at Morrisville State for seven seasons from 2013-19. This past fall he led the Mustangs to a 6-5 record, including a 4-2 Empire 8 mark, and an ECAC postseason bowl berth. Morrisville handed Empire 8 co-champion Brockport its lone league loss.

Overall, Fitzpatrick guided the Mustangs to four winning seasons (2014, 2015, 2018, 2019), including one conference championship title and three postseason ECAC bowl appearances. In 2014, Morrisville finished with a 9-2 mark – its best record since becoming an NCAA Division III member – and claimed a share of the New Jersey Athletic Conference (NJAC) crown with a 6-1 league mark. The Mustangs earned a berth to the ECAC North Central Bowl, where they captured the college's first postseason championship title as an NCAA Division III member. Fitzpatrick was voted the NJAC Co-Coach of the Year by his peers and was named the D3football.com East Region Coach of the Year.

"I am pleased to welcome Curt as the newest addition to our Cortland family," said Urtz. "His experience as a head coach not only within our very competitive conference, but in New York as a whole, makes him an ideal choice for us. This experience, along with Curt's football expertise, makes this a great match for Cortland football in the years to come. I believe he will not only preserve the great tradition of Cortland football, but also lead us into a very bright future."

"This is such a tremendous place," said Fitzpatrick. "I am blown away by the support for SUNY Cortland Athletics. I believe in the vision that Dr. Bitterbaum (Cortland president) and Mike Urtz have for our football program and I am excited to get to work. Over the next few weeks and months I look forward to building relationships with everyone in the Red Dragon family - coaches, alumni, colleagues, community members and, most of all, the players and their families."

During his time at Morrisville, Fitzpatrick's high-powered offense averaged 31.5 points and 438 yards per game, making it one of the most potent offenses annually in the Empire 8. Under his guidance, Mustang quarterbacks have been voted as the conference Offensive Player of the Year three times. Since 2013, a total of 49 Mustang student-athletes have earned Empire 8 or NJAC all-conference recognition and 61 have been named to the athletic director honor roll for their outstanding academic performance.

Prior to Morrisville, Fitzpatrick served as offensive coordinator and quarterbacks coach at Utica College from 2008-12. In his time with the Pioneers, his balanced, no-huddle offense was one of the best in the Empire 8, gained national attention and set numerous school records.

In 2012 the Pioneers featured the Empire 8 Offensive Player of the Year and three D3football.com All-East offensive performers. The team was ranked in the top 25 nationally in six major offensive categories, including points (34.2) and yards (465) per game, and set 10 school records. Throughout his tenure at Utica, Fitzpatrick coached 16 all-league offensive performers, and off the field he developed an accountability program for the football program centering on academic and community success, in addition to administering the off-season strength and conditioning program.

A native of Fulton, N.Y., Fitzpatrick graduated from St. John Fisher College in 2004 with a bachelor's degree in management. A standout quarterback for the Cardinals, Fitzpatrick served as a team captain and was a four-year letterman. In his final season, he earned Empire 8 all-conference honors and set school passing records in touchdowns (30) and yards (2,366) while leading the program to a 10-2 overall record and an NCAA Sweet 16 appearance.

Upon graduation, Fitzpatrick returned to his hometown in 2005 to coach quarterbacks and wide receivers at Fulton High School, which captured the OHSL Class A league championship. He returned to St. John Fisher as a quarterbacks coach for two seasons from 2006-07. The Cardinals amassed a combined 23-4 record, won two Empire 8 crowns and were the top-ranked team in New York State each season. Fisher advanced to the NCAA semifinals in 2006 and the quarterfinals in 2007, and for the two seasons combined recorded more than 5,300 passing yards and 55 touchdowns.

Since 2006, Fitzpatrick has been actively involved in camps and clinics as both a coach and director. He also has served as guest speaker at numerous clinics throughout New York State and New England.

In addition to his bachelor's degree from St. John Fisher, Fitzpatrick earned a Master of Science in athletic administration from Ohio University in 2012. He currently resides in Chittenango, N.Y., with his wife, Molly, and two children, Collins and Oliver.

Cortland finished last season with an 8-3 overall record and was Empire 8 co-champion with a 5-1 mark. The Red Dragons qualified for the New York Bowl for the program's 24th postseason berth. Cortland will open the 2020 season with a non-league game at Washington and Lee University in Virginia on Sept. 5 and will play The College of New Jersey in its home opener Sept. 12.