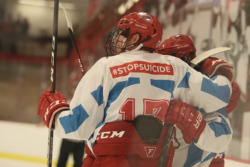 
The SUNY Cortland men's ice hockey team raised $11,013.86 for the Central New York chapter of the American Foundation for Suicide Prevention (AFSP) through its recent charity campaign.
That total includes more than $3,400 raised from an auction of jerseys specially designed by Cortland junior defenseman Justin Schebel that the Red Dragons wore during their 4-2 home win versus Potsdam Nov. 8. Money was also raised through sponsorships, raffles, game-night promotions and ticket sales, and other donations. In addition, the team held a Resource Fair prior to the game with the theme "Have a Real Convo," which is part of the AFSP's social media campaign to increase awareness of effective ways to reduce the likelihood of loss by suicide.
"AFSP's Central NY Chapter is incredibly grateful and humbled by the enthusiastic support from the Cortland Men's Hockey team and the entire Red Dragons community," said Missy Stolfi, the AFSP's Area Director of its Western & Central New York Chapters. "This is a powerful message for student athletes to lead the way in saying that it's okay to talk about our mental health, that we need to look out for one another, and that hope and healing are possible. We look forward to years to come in partnership with the SUNY Cortland community as we work together to #stopsuicide."
This year's event marks the Cortland men's ice hockey team's seventh charity fundraiser/jersey auction since the 2011-12 season. Previous events have supported such groups as the CNY Autism Society of America, the American Red Cross, the Cortland Loaves and Fishes food pantry, and the Cortland County Family YMCA.