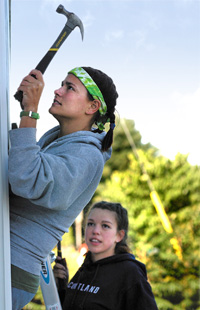 
John McNerney logged countless unpaid hours in the community during his undergraduate years at SUNY Cortland more than two decades ago.

Today, as director of the Cortland City Youth Bureau, he encourages his staff to recruit college students for similar opportunities to invest their time in a worthwhile cause.

“My experiences at SUNY Cortland opened doors for me when I went into the field,” said McNerney, who graduated with a bachelor’s degree in recreation administration in 1987. “There’s no doubt about it.”

Today’s students are looking for the same results that McNerney found. The civic engagement volunteer opportunities available for SUNY Cortland students have the potential to further career paths or even change them, according to John Suarez, the coordinator of service learning for the College’s Institute for Civic Engagement.

“After volunteering, some students have changed their majors,” Suarez said.

It is a major reason why the Institute for Civic Engagement and Career Services offer a volunteer fair early in the fall semester. This year’s event takes place from 4 to 5 p.m. on Wednesday, Aug. 31, in the Corey Union Exhibition Lounge.

During the fair, students can move around and visit with representatives from a variety of volunteer agencies, in a fashion similar to an academic open house. The Institute for Civic Engagement partners with roughly 30 agencies, and many of them will be present at this year’s volunteer fair.

“The student, very importantly, can talk with the representative (of the volunteer organization) to find out what kinds of programs are available, to what extent those programs match the student’s interests and to what extent they match career opportunities,” Suarez said.

For example, the local YWCA’s Bridges for Kids program, which pairs children from stressful home environments with positive role models for a few hours each week, tends to be a popular volunteer program because SUNY Cortland trains many aspiring educators, he said. Family Counseling Services, the Cortland YMCA and the Cortland Youth Bureaus in the city and the county are also hot volunteer destinations.

Andrew Herman, a sophomore and physical education major from Dix Hills, N.Y., coached a soccer team and officiated basketball games for pay at the Cortland City Youth Bureau last year. During that time, he saw the relationships his college friends forged with children who are less fortunate through the Bridges for Kids program.

He will volunteer with the Bridges for Kids group this fall.

“I like giving kids more opportunities than they would normally have,” Herman said. “It’s not costing me anything just to take them out and do fun things that they wouldn’t normally do.”

Herman has learned plenty of games to play with children in his physical education classes, he said. Besides keeping his younger companion active with games and activities, Herman plans to take his new friend to SUNY Cortland athletic contests.

McNerney said his job at the Cortland City Youth Bureau is made easier by the preparedness of local college students like Herman. He often hears from other recreation directors in New York state who struggle to find eager helpers.

“They pull their hair out trying to find good, quality volunteers and I’ve never had that problem,” he said.

Many students begin their volunteer experience with one of the Youth Bureau’s 125 programs already trained in cardiopulmonary resuscitation and first aid.

The College maintains strong ties with its volunteer partners, in part because many of them employ SUNY Cortland alumni. Besides McNerney leading the Cortland City Youth Bureau, other graduates work at Family Counseling Services, Access to Independence the YWCA, and the YMCA, among other agencies.

Students often find so much satisfaction in their volunteer experiences that they continue volunteering after taking service-learning courses, Suarez said. Service learning, like a volunteer effort or an internship, involves civic engagement with a meaningful community project. But service learning also incorporates a social justice issue, regularly guided reflection and an academic component.

“You’ve got to be on the front lines,” Suarez said. “It’s not just observing; it’s doing.”

During the 2010-11 academic year, nearly 1,500 SUNY Cortland students contributed 24,431 hours through service learning courses. And this past spring, the College was named to the President’s Higher Education Community Service Honor Roll with Distinction.

The Aug. 31 volunteer fair will include typical volunteer and service learning opportunities, Suarez said. For more information on the event, contact him at (607) 753-4391.