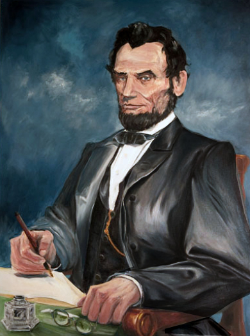 
A renowned Abraham Lincoln biographer will speak at the Lynne Parks ’68 SUNY Cortland Alumni House on Monday, Nov. 7, thanks to the work of a pair of College alumni who continue to celebrate the former president’s connection to nearby Homer, N.Y.

Michael Burlingame, the distinguished chair in Lincoln studies at the University of Illinois at Springfield and the author of the two-volume book Abraham Lincoln: A Life, will offer his lecture at 7 p.m. The event, which is free and open to the public, will be accompanied by refreshments.

Burlingame also will speak at the Center for the Arts in Homer on Wednesday, Nov. 9, at 7 p.m.

“Many popular periodicals have referred to him as the most knowledgeable man in the world on Lincoln,” said Martin Sweeney ’68 M.S.Ed. ’72, one of the alumni who arranged Burlingame’s visit. “He’s come out with the most recent and, so far, the most definitive Lincoln biography.”

Sweeney, a retired social studies teacher and Town of Homer historian, and David Quinlan ’81, a Marathon (N.Y.) High School art teacher, co-chaired a 2009 event titled “Homer’s Celebration of Lincoln in Paint and Print” to mark the bicentennial of Lincoln’s birth and recognize three local sons with connections to the former president.

“People are surprised to learn that there’s any connection at all, let alone what I have heard one person call the Lincoln trifecta,” said Sweeney, who also grew up in Homer before attending SUNY Cortland.

The bulk of Burlingame’s Nov. 7 talk at the Alumni House will address post-Civil War America and Lincoln’s lasting impression on it. In addition to his 2008 award-winning book, Burlingame wrote the 1994 book The Inner World of Abraham Lincoln. He also has edited several volumes of primary source material tied to Lincoln.

He received the Abraham Lincoln Association Book Prize in 1996, the Lincoln Diploma of Honor from Lincoln Memorial University in 1998 and Honorable Mention for the Lincoln Prize from Gettysburg College in 2001. Burlingame was inducted into the Lincoln Academy of Illinois in 2009.

Abraham Lincoln: A Life won the 2010 Lincoln Prize for the best scholarly work in English on Abraham Lincoln. It also was a co-winner of the annual book prize awarded by the Abraham Lincoln Institute of Washington, D.C.

Burlingame earned a bachelor’s degree from Princeton University and performed his doctoral work at Johns Hopkins University. He taught history for 33 years at Connecticut College in New London, Conn. before joining the faculty at the University of Illinois at Springfield in 2009.

Besides collaborating on the 2009 event to honor three Homer residents with ties to Lincoln, Quinlan and Sweeney each celebrated their admiration for the former president in different ways.

Quinlan tapped his artistic talent and painted a portrait titled “The First Reading of the Emancipation Proclamation Before the Cabinet.” He donated it to the SUNY Cortland Alumni Association and it now hangs in the Parks Alumni House.

Sweeney wrote a book, Lincoln’s Gift From Homer, New York: A Painter, an Editor and a Detective, that was released in August. It examines Carpenter the artist, Stoddard the editor and DeVoe the detective and the ties each man shared with Lincoln.

“You might say that David is Homer’s current Carpenter and I’m the current Stoddard,” Sweeney said.

Both graduates appreciate their hometown’s historic ties to Abraham Lincoln.

“When you drive through Homer, it looks very much like a 19th century village and it is,” Sweeney said. “It’s also a place that has a strong connection to Lincoln, times three.”