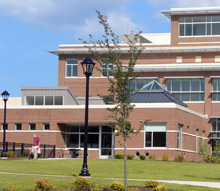 
SUNY Cortland has dedicated the resource room of its Child Care Center to an emerita staff member who served the College for more than 50 years during a ceremony on Friday, Sept. 2.

Angela Priore Thurlow ’82, an associate director of admissions emerita and a recipient of the 1994 SUNY Chancellor’s Award for Excellence in Professional Service, was recognized for an unparalleled career at the College that spanned from 1955 to 2006, and for her generosity.

The dedication ceremony was held in the Ruth Hart Blanchard ’23 Gross Motor Skills Room. A reception followed in the Patricia A. Clark Atrium.

“For more than five decades, Angela offered her wisdom and grace to the College and to the Cortland community,” said Peter VanderWoude, the manager of planned gifts for the College. “The naming of the Angela Priore Thurlow ’82 Resource Room is a fitting acknowledgement for her brilliant career and her 25 years of service to the Cortland College Day Care Center Committee.”

The resource room that bears Thurlow’s name is considered a multipurpose room. It includes a lending library of children’s books for teachers and parents, a music system and a large flat-panel television used for training purposes. Children who range in age from six weeks to five years attend the Child Care Center.

Construction of the 31,000-square foot, three-story SUNY Cortland Education Building and Child Care Center was completed in January 2009. The building’s front entrance faces Prospect Terrace and its first floor is dominated by the Child Care Center.

Thurlow was instrumental in establishing a series of annual summer receptions hosted by SUNY Cortland alumni for newly accepted students. She chaired the Cortland College Day Care Center Committee for a decade and saw the project become a reality.

“I have always thought of Angela as the go-to person when I wanted perspective on situations related to the Child Care Center,” said Johanna Hartnett, the executive director of the SUNY Cortland Child Care Center. “She always offered a thoughtful and reflective outlook to board decisions.

“The Child Care Center staff is a lucky group to have known such a visible and important board member.”

Thurlow was the senior College staff member at the time of her retirement in 1995. She continued to serve SUNY Cortland on a part-time basis until 2006 as an academic advisor in the Office of Advisement and Transition.

An involved member of the community, Thurlow is a past president of the YWCA Board of Directors and a past recipient of the YWCA Volunteer of the Year Award. She was presented the Zonta Woman of Achievement Award in 1982 and served on the Cortland County Planning Board from 1986 to 1992.

Thurlow, who obtained a bachelor’s degree from SUNY Oswego and a master’s degree from Syracuse University, taught as an elementary school teacher in Utica, N.Y., between 1951 and 1954 before moving to SUNY Cortland.