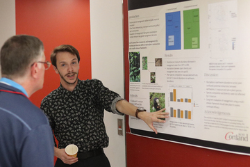 
For a few hours on a Friday night, a group of SUNY Cortland alumni visiting with student researchers in the campus science complex were transported back in time.

No, it wasn’t the result of a very advanced physics project. The alumni were remembering their own college science experiences during the fourth SUNY Cortland Alumni-Undergraduate Research Science Symposium, which kicked off on Oct. 11 with a lab crawl in Bowers Hall. As the alumni — most of whom have had successful science careers — walked through the building, current students engaged with them, explaining the undergraduate research displayed in posters lining the walls.

David Cole ’73, a professor in the School of Earth Sciences at The Ohio State University, was one of the returning alumni who listened intently to today’s students about their research. He was mesmerized not only by the quality of their work but also by their enthusiasm.

“They’re a lot smarter than I was back then,” Cole said. “They’ve been exposed to a lot more technology and a lot more deep thinking. Not that we weren’t, but I think the tools here are amazing for a small university. There’s much more deep thinking about the sciences and obviously good mentoring, that’s pretty clear.”

Christian Harrison, a senior chemistry major from Corning, N.Y., explained his work with Associate Professor Frank Rossi on the fluorescent labeling of proteins in order to achieve live cell imaging. One by one, alumni came up to ask questions about the research as well as his post-Cortland plans.

“I feel like what they do is very relevant,” Harrison said of the alumni. “They’re professors or they work in the industry, which are my two paths. To hear how they got to be where they are in inspiring.”

The Alumni-Undergraduate Research Science Symposium was created in 2017 to connect Cortland undergraduates and faculty with alumni who have gone on to become industry leaders in their fields. They gather on campus to share stories from their research, bounce ideas off one another and form connections that are of significant value to students on the verge of attending graduate school or launching a career in the sciences.

Michael Bond ’75, M.D., is a champion of the symposium, having committed a significant planned gift that will endow it long into the future. As medical director of Advanced Dermatology and Cosmetic Surgery in Orlando, Florida, and an accomplished scuba diver, underwater photographer and published author in Marine Geology and National Geographic, Bond credits his time spent on undergraduate research with Professor Emeritus David Berger as vital to his ability to apply to medical schools. Future symposiums will carry Bond’s name.

William Baerthlein ’76, M.D., who attended and presented at this year’s symposium, made a major gift to support the immediate needs of the annual event. A member of SUNY Cortland’s Academic Hall of Fame, Baerthlein is a physician whose scholarship and expertise on methods for delivering babies has greatly influenced reproductive medicine.

Like his fellow alumni, Baerthlein looks back on his time as a Cortland undergraduate as instrumental to his later success. During his time on campus he led a team of classmates on a two-year study of sperm-egg chemotaxis in the African Clawed frog that was supported by a grant from the National Science Foundation.

“When I was a student at Cortland, there was very little student research going on,” he said. “Doing research is a vital part of undergraduate education. In today’s economy and academic world, it is critical to enhancing your chances of getting into medical school or a graduate program.

“These are opportunities that I did not have,” Baerthlein continued. “I enjoy seeing the symposium grow and know that we are impacting more students each year. I am giving back to students and to the institution that gave so much to me.”

The symposium continued on Oct. 12 with plenary presentations by senior Kiley Stoj on milkweed hybridization  in New York state and junior Marissa Kordal on the genetic response of oysters to plastic exposure.

Savannah Brancato, a senior biochemistry major from Clifton Park, N.Y., and Jon Guilt, a sophomore biology major from Syracuse, N.Y., discussed with alumni the research they did with associate professor Katherine Hicks on pollutant-digesting bacteria.

Brancato and Guilt were happy to share their findings while also chatting with alumni about their post-college options.

“You can see that people are still interested in what they may have been doing when they were here at SUNY Cortland,” Guilt said. “It’s cool connecting with people who have careers in science.”

Alex Politis ’80, chief of the Infectious Disease and Microbiology Integrated Review Group for the National Institutes of Health’s Center for Scientific Review, said he hadn’t been back to campus in 39 years.

He was glad to see Cortland undergraduates wrestling with research, not only for the scientific knowledge they gain but also for the problem-solving and communication skills developed along the way. Undergraduate research can help shape careers, whether the students stick in academia or find their way into another field.