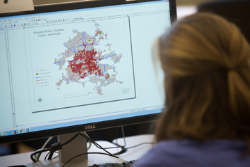 
Nick SanPhillipo ’15 came to SUNY Cortland with a wide range of interests and curiosity, but still not entirely decided on the right academic major.

Today, less than a year after his graduation, he’s working as a geographic information system (GIS) specialist in a growing field he discovered at the College. It’s a discipline that commonly uses computers and global positioning system (GPS) technology for mapping purposes, one that brings many valuable applications for monitoring the environment.

Better than simply finding a major or a job, SanPhillipo has gone a step further in helping current SUNY Cortland GIS majors map out their own futures. He recently returned to campus to recruit students at the College’s annual Career and Internship Fair, offering hands-on summer work opportunities that eventually could turn into careers.

“The possibilities in this field are endless,” said SanPhillipo, who resides in Hewlett, N.Y., and works with New York American Water. “Some companies are just now seeing what GIS is capable of providing and what it might do for them in the future.”

The number of practitioners relying on the technology-inspired work is rising, according to the Bureau of Labor Statistics. They include government agencies, disaster response teams and providers of public utilities like the one that hired SanPhillipo. Water companies commonly map underground pipes to streamline maintenance and monitor their condition. Many other employers are gathering similar data.

“We’re seeing a real growth in the number of jobs out there,” said Wendy Miller, an associate professor of geography who invited SanPhillipo to speak to her advanced GIS class when he came back to visit. “There’s lots of activity in environmental science, whether it’s the (Department of Environmental Conservation) mapping forests or a private group working with a logging company to harvest sustainably or a non-profit group assessing river health.

“Really, it’s anything you can think of.”

SanPhillipo credited the summer internship he obtained with the Department of Public Works in Cortland as a crucial point in his undergraduate career. Before graduation, he had gained crucial experience updating maps and using GPS software to track the department’s fire hydrants and valves.

“I liked that the work was hands-on,” said SanPhillipo, who pursued a concentration in advanced geospatial applications and a minor in computer applications. “I liked that it could be in the office but that it also involved field work.”

Miller noted that other students follow similar paths — leveraging local opportunities during college to eventually land jobs across the country that advance business, the environment and infrastructure planning. SanPhillipo had earned one five minutes away from his house roughly just a couple months after his graduation.

“It’s such a growing field,” he said. “There’s just so much opportunity.”